The prevalence of space travel in Soviet cinema is no surprise. An extraterrestrial superpower that placed scientific utopianism at the heart of much of its official culture, its cinema demonstrates that the Soviet Union was at home outside the confines of the atmosphere — especially in the post-war, post-Stalinist mid-century, when the nation was invigorated by victory in the Space Race.

From its earliest years, the Soviet film industry launched its protagonists into the great beyond, imagining encounters with non-human life, hyper-charged technological progress, and the fusion of earthly socialist principles with the potentials and hazards found at the final frontier.

If space was a constant presence, however, it was also a mutable, contingent one. In keeping with sci-fi’s ambiguous place within Soviet culture, cinematic depictions of the cosmos changed with the times over the near-70 years between the first to the last Soviet space films, reflecting ideological and aesthetic shifts. 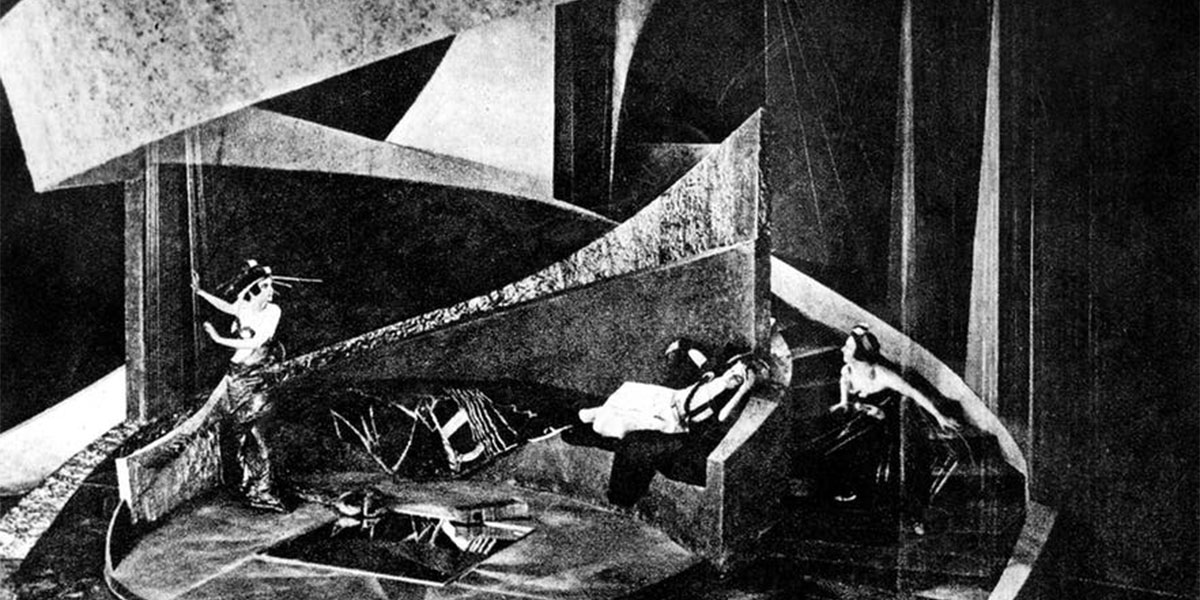 Aelita (1924)
Aelita is a key artefact of the Soviet mid-1920s, a period of experimentation, speculation, and agitation

One of the first Soviet silent classics was a film about space travel: Aelita, adapted by Yakov Protazanov in 1924 from Alexey Tolstoy’s novel of the previous year. The film tells of Los, an engineer in post-revolutionary Moscow, whose jealousy towards his wife prompts an escalating daydream about the eponymous Martian monarch. In his reveries, Los and companions fly to Mars, which is governed by a brutal aristocratic caste. The visitors instigate a revolution amongst the planetary proletariat, and Los ultimately kills Aelita despite their having fallen in love in the meantime. The film’s reputation owes much to its remarkable production design: the sets by Isaak Rabinovich and Viktor Simov and the costumes by Alexandra Ekster take the Constructivist avant-garde of Rodchenko, Tatlin, et al, and use it to convey the otherworldliness of Martian society. Protazanov, described by film scholar Denise Youngblood as the Russian D. W. Griffith, reworks Tolstoy’s didactic source material with great humour and visual sophistication.

Aelita, in both novel and film form, is a key artefact of the Soviet mid-1920s, a period of experimentation, speculation, and agitation. Tolstoy’s text was one of a rash of notable sci-fi literature, although more obviously pro-Soviet than the likes of Yevgeny Zamyatin’s famous dystopia We (1921), or Mikhail Bulgakov’s Fatal Eggs (1924) and Heart of a Dog (1925). Much of the cultural emphasis of the period was on construction and human transformation, the messy material of everyday life; Protazanov makes sure to ground Los’ daydreaming in bustling, contemporary Moscow. Indeed, the flight to Mars operates as a cautionary tale, warning Los back to his duties as a citizen and a husband in Red Russia, rather than on the Red Planet.

The Stalinism that followed the twenties’ flights of fancy foreclosed many artistic avenues, sci-fi among them. The mainstream culture of the 1930s and ‘40s turned away from the stars to celebrate present-day achievements in the USSR’s fields and factories; Stalinist protagonists found adventure in conquering and claiming the Arctic territories, or in militaristic determination, rather than in dreams of distant planets. Soviet sci-fi would not achieve real maturity until the post-Stalinist ‘Thaw’ of the late ‘50s. A country looking to cast off the shadow of earlier repressions and to redefine itself along optimistic and progressivist lines found in the burgeoning Space Race a vehicle for newfound scientific utopianism, a literal broadening of the horizons. Historians of this period now emphasise how vital space was to Khrushchev’s attempts to ‘de-Stalinise’ the Soviet Union: the cult of the cosmos a secular religion, the cosmonauts’ fresh-faced heroes free from the stains of past ‘glories’. As Gagarin and co broke new ground, the standard Russian term for ‘sci-fi’, nauchno-fantasticheskii, or ‘scientific fantastic’, seemed almost to describe Soviet reality.

The first great director of the Space Race was probably Pavel Klushantsev, whose techno-optimism chimed with the times and exerted an international influence (some have spotted his hand in Kubrick’s 2001). Klushantsev’s first success, Road to the Stars (1957) walked the line — often blurred in Soviet film — between documentation and imagination, employing the innovative special effects that became his calling card to tell the story of the Soviet space program past, present, and future. Klushantsev’s depiction of technology that was both plausible and far-fetched, from domesticated rockets to terraformed moon colonies established the necessary link between visualisation and realisation that helped drive cosmos fever amongst the public. 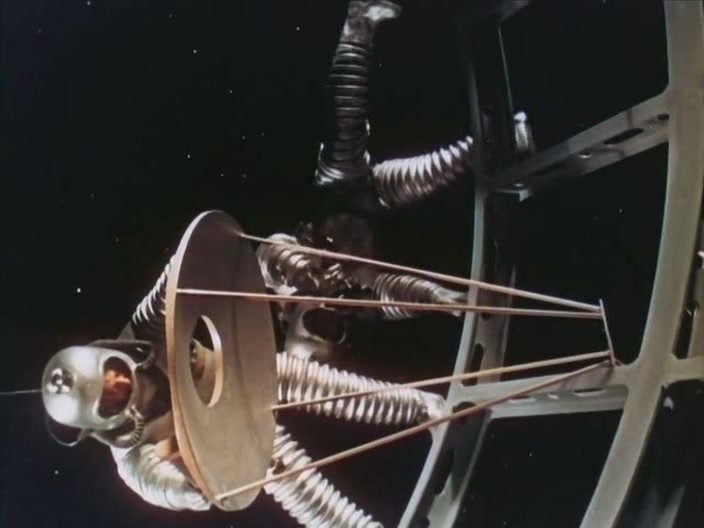 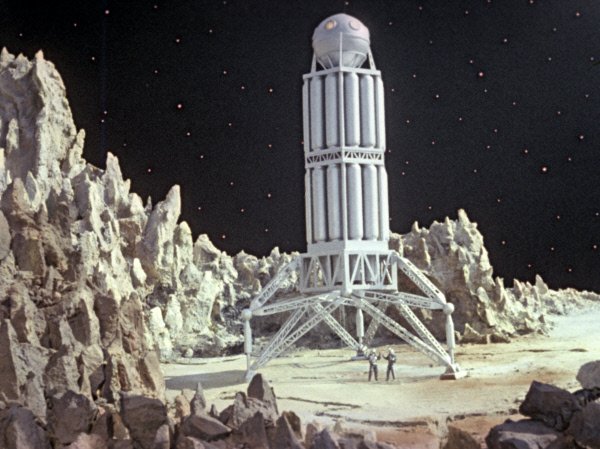 Almost a year to the day after Gagarin’s first voyage, Klushantsev’s only fiction feature, Planet of the Storms, was released. Here, the director applies his meticulous craft to the endearingly sincere tale of a joint Soviet-American mission to Venus that must overcome meteor strikes, hostile terrain, murderous flora, and space dinosaurs. The film’s narrative of international, intergalactic cooperation may seem out of place in the midst of Space Race rivalry, but it speaks to Thaw culture’s increased emphasis on foreign influence and dialogue; the American robot ‘John’ is arguably the most memorable character. American film’s cult impresario Roger Corman certainly got in on the internationalist act when he recut some of these pioneering Soviet space features for American re-release. Mikhail Karyukov and Alexander Kozyr’s The Heavens Call (1959) had already become Battle Beyond the Sun (1962) in Corman’s hands before Planet of the Storms was the two-part Voyage to the Prehistoric Planet (1965) and Voyage to the Planet of Prehistoric Women (1968).

The Soviets did not retain their prominence in the world of sci-fi cinema for long. US special effects departments soon outstripped them, and the symbolic blow of the Moon landings, following on from Gagarin’s premature death a year previously, quickly dampened public enthusiasm for cosmic exploration. The genre was neglected within the august institutions of Soviet filmmaking, although the 1970s and ‘80s did see a steady flow of space films and television series aimed at children and adolescents that retained something of Klushantsev’s spark. Richard Viktorov was a leading proponent; his two-part odyssey Moscow-Cassiopeia (1974) and Adolescents in the Universe (1975) posits teens as the natural inheritors of the cosmonauts’ progressivist, humanist mission (the latter film sees our young adult heroes facing down robots bent on destroying the human capacity for emotion). Animations such as Roman Kachanov’s Mystery of the Third Planet (1981) and Boris Shnaper’s In The Thirtieth Century (1972) were also popular.

Mystery was one of many film and TV adaptations from the prolific and much-beloved sci-fi author Kir Bulychev, whose Per aspera ad astra Viktorov reworked for the screen with stunning effect in 1981. While still nominally targeted at a younger audience, the film balances quite impressively the teen genre’s now-anachronistic optimism with a late-Brezhnevian cynicism; the result is a film about both human and non-human life, about mankind’s capacity to traverse the stars but also its destructive potential. Niya, a beautiful cyborg, request’s Earth’s help to salvage her home planet of Dessa, which has been wracked by environmental disaster later revealed to be the work of rapacious human colonists. The villains may still be space-capitalists, but the images of desiccated Dessa are not so easily disentangled from the Soviet Union’s own environmental catastrophes in the Aral Sea and beyond. Space travel is by this point in Soviet film completely desacralised; Dessa is not virgin territory, nor a blank canvas for human potential, but the dark mirror image of a fragile Earth. The alien planet in Per aspera is itself a character in the film — in this sense, Viktorov recalls the Soviet space travel tale most familiar to foreign audiences and another adaptation from a novel: Tarkovsky’s Solaris (1979). 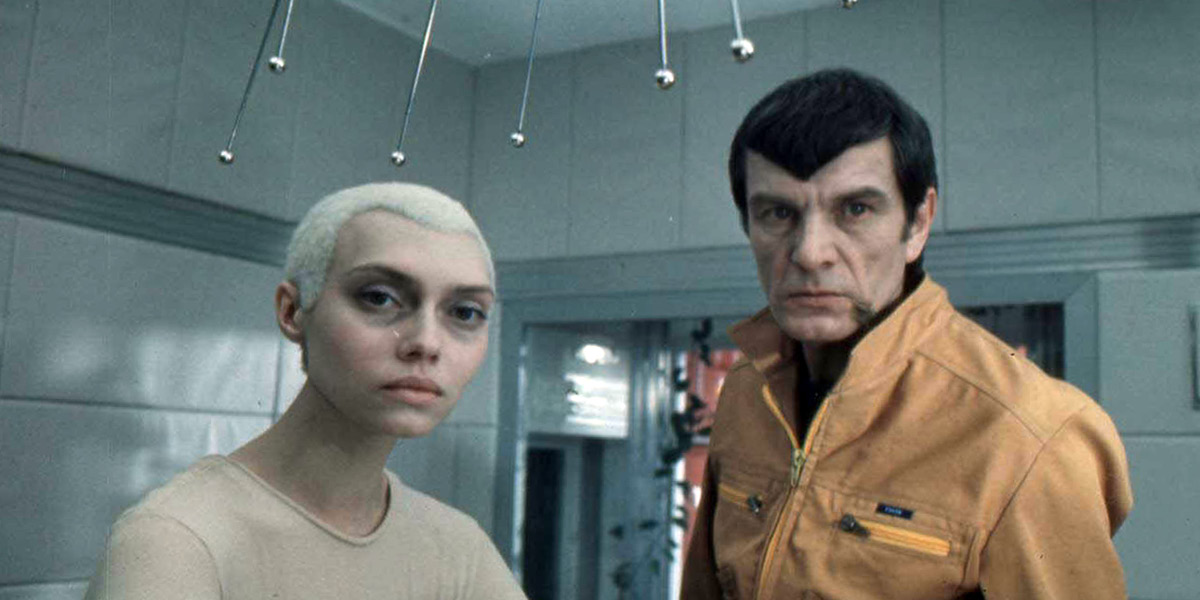 The last great Soviet sci-fi was arguably Georgiy Daneliya’s Kin-Dza-Dza! (1986), showing on Klassiki as part of the Soviet Space programme. The story of Uncle Vova and The Violinist’s accidental teleportation to the planet Pluke picks holes in the pettiness of social structures and the cynical pragmatism that had come to overwhelm earlier socialist idealism. That Daneliya, Soviet cinema’s arch tragicomedian, turned to space for his final masterpiece shows just how much the cosmos had been brought down to earth by the time of perestroika. In many ways, it brings Soviet space travel back to its origins: like Aelita, the action begins and ends in Moscow, the centre of gravity that warps space around itself; unlike in Protazanov’s film, there is no sense of a new world being built. Instead there is simple human absurdity, reflected back on itself by cosmic farce. As Natalija Majsova puts it in her superb survey of Soviet sci-fi, Kin-dza-dza! closes out the genre with its heroes ‘dirty, slightly bored, petty, and fatalistically invested in following obnoxious rituals.’ For Soviet filmmakers, space always had a human dimension — one that expanded and ultimately contracted again. 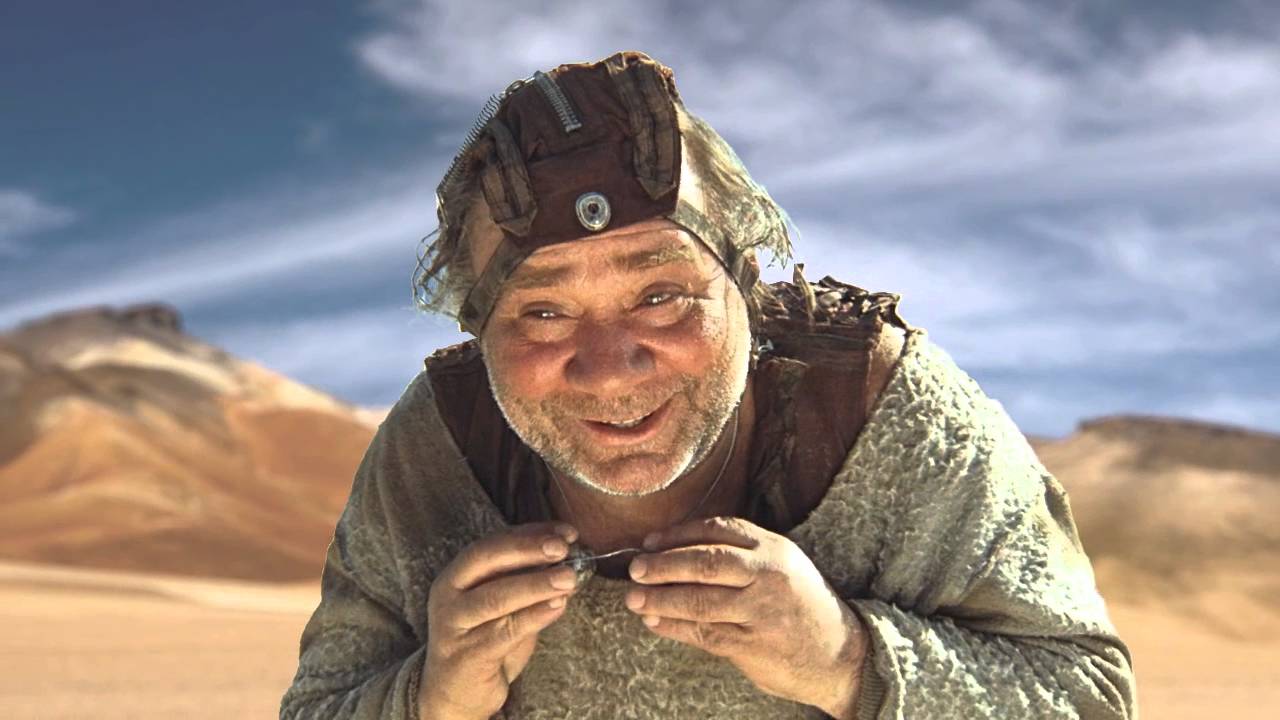