Uzbek auteur Ali Khamraev has directed over 20 films, both fiction and documentary, over the course of a career spanning six decades. Having studied in Moscow, he carved out an independently-minded career in his native Tashkent, alongside stints working in Tajikistan and Afghanistan. This month we are celebrating his poetic and exacting cinematic vision on Klassiki, with two classics streaming in our Pick of the Week section: Man Follows Birds (1975) and I Remember You (1985). We spoke with Khamraev via email to ask him about life as a young director, getting advice from Fellini and Kurosawa, and his battles with Soviet censors. 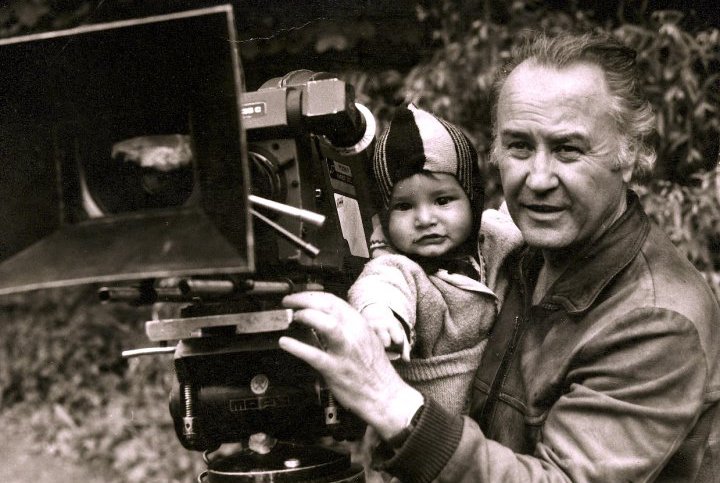 Klassiki: Your directorial career began in the sixties. What state was Uzbek cinema in at that time – what was the standard of film professionals? How did your working conditions in Tashkent differ from those of directors working in Moscow or Leningrad?

Ali Khamraev: In the ‘60s, Uzbek cinema began to overcome a crisis that had been set in motion under Stalin. Everyone knew that Stalin would personally favour just 10 or 12 films a year from the elite of Soviet filmmaking: the likes of Sergei Eisenstein, Vsevolod Pudovkin, Aleksandr Dovzhenko, Mikhail Romm. In Uzbekistan, directors were required to produce documentary and popular scientific rather than fiction films: glorifying life in the sun-kissed republic, telling stories about the fight against harmful harvesting practices, or the rules of public transport. After Stalin’s death, in the period when Khrushchev was increasing funding and allowing for the creation of a new, artistic type of cinema, old and embittered directors continued making primitive films with theatrical acting and a varnished presentation of reality; films about the battle between good and even-better.

But life moved on, and a new generation of filmmakers arrived: young directors who had studied in Moscow or at the Tashkent Theatrical Institute, who dared to break with old traditions. Their films were marked by a high level of professionalism, by their poetry, by their use of modern techniques borrowed from the masters of international cinema. People like Shukhrat Abbasov, Elyor Ishmukhamedov, Damir Salimov, Uchkun Nazarov, Kamara Kamalova, Ravil Batyrov, Melis Abzalov. At that time prominent figures in Soviet film collaborated with and helped out the Uzbek cohort: Andrei Tarkovsky, Fridrikh Gorenstein, Andrei Konchalovsky, Kira Muratova, Gennady Shpalikov… Actors, artists, and camerapeople started working in Uzbekistan who had been trained by the wonderful teachers in Moscow and Leningrad – Khatam Fayziev, for instance, who shot a number of my films, had studied in Moscow under the great Aleksandr Galperin.

In Uzbekistan in the ‘60s – as in the rest of the USSR – the director was a figure of unquestioned authority, everything and everyone submitted before him. For the crowd scenes in my film The Extraordinary Commissar I had 2,500 soldiers, generals, and lieutenants following my orders. Still, we shot on poor-quality Soviet film, with cumbersome equipment that had been copied from American and German cameras. The most agonising thing for us was when, as so often happened, a screenplay or even a finished film would need to be ratified first in Tashkent, and then also in Moscow. I remember returning from Moscow to Tashkent, completely dead on my feet, having screened my film Triptych for the fifth time after another round of edits. I got home, drank a glass of vodka, lay in bed facing the wall, and told myself: “Well, Khamraev, you finally finished off your long-suffering film… Congratulations, here’s your Oscar!” I’ve made 20 fiction films – that means I’ve won 20 Oscars…

In a sense, our working conditions were exactly the same as those of the Moscow and Leningrad directors: we were all under the sway of brutal censorship, subject to the whims of editors and censors. One Muscovite editor, Anton Segedi, who had been sent to work in Uzbekistan, sat in my home over a glass of vodka and a plate of plov and openly told me: “Khamraev, you’re a smart guy! Don’t you see that I’m just an attack dog of communism? I bark at whoever they tell me to…” Eventually Anton moved to the sticks to tend to his rather marvellous collection of orchids. 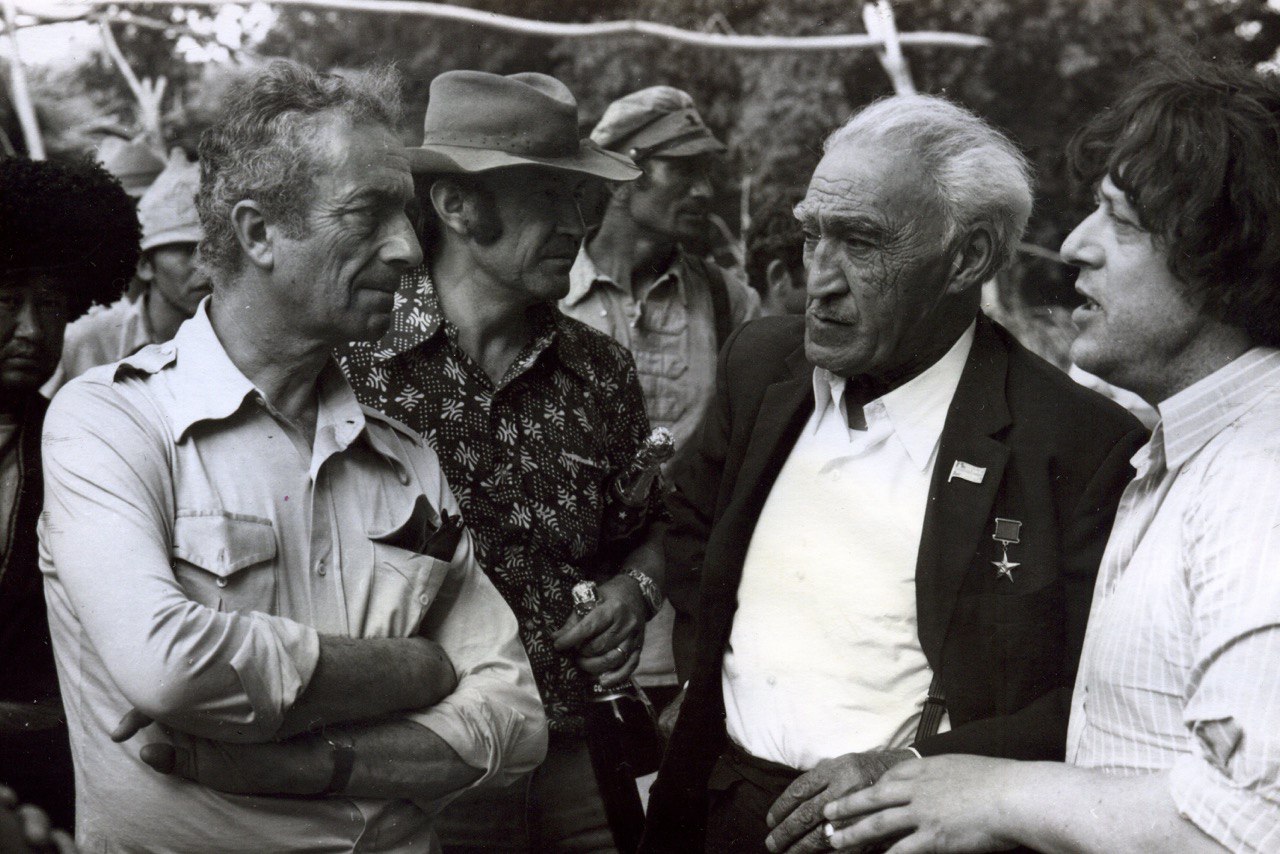 Khamraev (second from left) with Michelangelo Antonioni in Khiva, Uzbekistan, 1976

K: On Klassiki, we are screening three of your films from the 1970s and ‘80s. Which Soviet and foreign directors had the greatest influence on you at that time?

A: Then as now I was influenced by the whole world of classic culture: literature, painting, music, and of course film. I became friends with Tarkovsky, with Parajanov, with Alexei German, with Kira Muratova, and we would often talk and exchange our thoughts on our beloved profession. At film school in 1956 I first saw Akira Kurosawa’s masterpiece Rashomon, which became a permanent compass for my own creativity. And then I went on to watch and fall in love with the wonderful films of Chaplin, John Ford, Alfred Hitchcock, Federico Fellini, Michelangelo Antonioni, Ingmar Bergman, Orson Welles, Satyajit Ray, and many more. I knew some of these maestros personally. In my notebook I still have written down their advice to me, which has often helped me in life as well as in work.

Akira Kurosawa: “If you’re shooting a scene with rain, it had better be pouring it down.”

Federico Fellini: “Don’t think of the audience when you’re shooting a film. The most important thing is that your wife and closest friends like it.”

Michelangelo Antonioni: “I have two pieces of advice for you. Look after your digestion, and sleep less.”

Sergei Parajanov: “Write this down: Khamraev knows how to do everything – he could even turn the phone book into a film!”

Antonioni told me: “I have two pieces of advice for you. Look after your digestion, and sleep less”

K: I Remember You is a very autobiographical film. Why was that an important approach to take for you? Is it harder to make films about one’s own life than about the lives of others?

A: In 1973, in the forests outside Smolensk, I found the grave of my father, Irgash Khamraev – a screenwriter and actor of pre-war Uzbek cinema and a junior lieutenant who was sent to the front in the second month of the German invasion of the USSR. All I had to hand was his death notice, but kind people helped me to find his resting place. Two weeks later I was in East Berlin with Tarkovsky; he was screening Andrei Rublev and I was screening The Seventh Bullet. Of course, I told him about my search for the grave. We drank a bottle of vodka in memory of my father, and Tarkovsky made me swear that I would make a film about my journey. I wasn’t able to realise that plan until 1985; by that point Andrei was already living abroad and would soon be dead. He never got to see the film that was made on his strict advice.

The film was banned in Uzbekistan. I complained to Gorbachev, and then to the Party Congress. A commission of the Filmmakers’ Union flew to Tashkent led by Sergei Gerasimov – who had taught my father at the Leningrad film school in 1930. Eventually the film was screened in the USSR and I travelled around the world with it, even while no one in Uzbekistan had seen it yet.

An autobiographical film poses the exact same problems as any other film: one’s hero always lives and moves amongst other people, always occupies a set place in time, always undergoes conflicts and trials. There’s no difference for me between that and any other type of film. 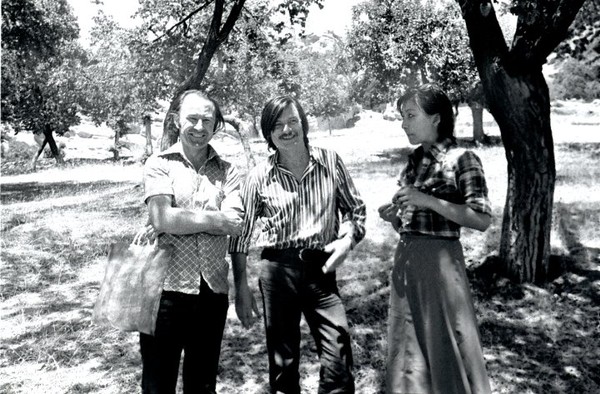 K: Like many of your films, Man Follows Birds draws on the aesthetics, history, and mythology of Uzbekistan and other Central Asia cultures. How did you tackle the problem of making films from an Uzbek perspective that could nonetheless appeal to a broader Soviet and international audience? How did you strike the right balance, for instance, in a film like I Remember You, which is about the tension between the Russian and Uzbek experiences of the war? Or The Bodyguard, which is a shining example of the Red Western, but which also demonstrates a real, deep interest in the details of Central Asian life?

A: Man Follows Birds was a remarkable journey into the unknown for me – I’d never made anything like it before. The director of the Uzbekfilm studio asked me to take over the project after the previous director had been fired. I read the stunning screenplay by [Tajik poet and screenwriter] Timur Zulfikarov and I was overcome with enthusiasm: this is fascinating, but how can it be filmed? The script was unadulterated mythology from medieval Central Asia, told in a heightened poetic register. I knew I would need a talented crew and I found them: the film was shot by Yuri Klimenko from Ukraine, the sets were built by Emmanuel Kalantarov, a Bukharan Jew from Samarkand, the costumes were designed by Rustam Khamadov. We managed to shoot throughout all four seasons. In Soviet times that kind of thing was possible; these days, a producer would worry too much about cutting costs and force you to use computer technology instead.

We studied Oriental miniatures; we hunted down the ruins of medieval fortresses; we got up at four in the morning to shoot the sunrise. (We could have shot those scenes at dusk, but Klimenko said that nature looks tired in the evening, and I agreed.) When we took the film to Moscow, they accused me of Parajanov-style symbolism and demanded that I cut the scene from the end of the film where the old man teaches the boy to fence with sabres. “Why are you showing young people wielding weapons?” they shouted. In reply I lied, quite brazenly: “The head of Uzbekfilm approved the ending! He said that we need to teach our youth to bear arms. After all, China is right on our doorstep…”

With I Remember You, I needed all my strength to deal with the censors. They asked me – the son of a Tajik father and a Ukrainian mother – “you may be an Uzbek, but why do you show Russians in such a bad light? Don’t forget that Russians are our oldest brothers! Why do you only show empty Kazakh steppes from the windows of the train? The Kazakhs will be offended! Why does the dining car serve Pepsi? Stick some Uzbek lemonade in there instead…” This was in 1985: perestroika was already underway. Clearly it hadn’t made it to Uzbekistan yet.

I shot The Bodyguard in Tajikistan. They treated me well there – they knew that I was ethnically Tajik. Whenever I got into a fight with the management in Uzbekistan, I would head there instead. I’d written a script for a Red Western based on the Civil War, but I was having trouble casting the leads. I happened to be in Moscow and told Tarkovsky about the trouble I was having. At the time he was finishing up Stalker. He rang up the two leads, Anatoly Solonitsyn and Aleksandr Kaidanovsky: “Guys, go and see Khamraev in Central Asia, eat his plov, have some fun with the roles, earn some money…” And John Ford helped me too, with his immortal Stagecoach. And Kurosawa, with his masterpiece Rashomon. All my teachers and idols live on for me in their wonderful films. They are always with me.

Watch Man Follows Birds and I Remember You as part of Klassiki’s Pick of the Week selection from August 17th.