Sergei Livnev was one of the most exciting voices in Russian filmmaking in the “Wild Nineties” after the fall of the Soviet Union. But after just two features, and a stint as head of the Gorky film studio, he emigrated to America and turned his back on directing. After two decades working as a producer, Livnev was back behind the camera in 2019 for the bittersweet family drama Van Goghs, which is Klassiki’s Pick of the Week from 31st August. We spoke with Livnev about his return to filmmaking, self-acceptance, and his memories of the 1990s.

Klassiki: Why did you decide to go back to directing after such a long time away? And why was this the story that you needed to tell?

Sergei Livnev: I started out as a screenwriter and a director, but after making two films I switched to producing, which I did for 20 years. Frankly, I became really bored. Business is not my natural thing. I always wanted to express myself and I felt miserable producing other people’s films. I should probably say why I dropped [directing] in the first place. On the one hand, I wanted to say something about myself; but on the other, I was afraid to tell the truth. I didn’t understand that at the time. It was a messy feeling: wanting to be sincere but being afraid to show what I am really like: weak, unsure, unconfident. “To be or not to be…” [laughs] Instead of trying to resolve this, I decided to drop it, to just produce films, [which is] much safer. After more than 20 years of doing this, I realised that it’s not interesting for me at all and there is nothing bad about letting people know what I’m really like. There’s no shame here. I decided to make a film that would talk about things that were of interest to me. So, this film I made with a different attitude to the first two films. Frankly, the aim of those films was to say but to not say [something], but to hide.

K: The stylistic difference between a film like Hammer and Sickle and Van Goghs is certainly striking.

S: When I made Hammer and Sickle, I was trying to be interesting – playing games with genres, with style, with cinematic language, which I’m not interested in anymore. With Van Goghs, I didn’t need any genres, any style, any cinematic language. I don’t care how I express things, only what I feel.

K: This film is really full of regret, of the sense of opportunities missed. All of the characters are ageing and aware that they are running out of time. What was it about that dynamic that appealed to you?

L: That was the state of mind [I was in]. I was interested in making a film about how to live when you don’t know how to, [when] you don’t want to live, when you can’t love anybody, when you don’t have any belief in life. This has its roots in our relationships with our parents. Resolving your relationships with your parents is the way to find your roots, find some mode of existence. By resolving his very poisonous relationship with his father, the hero of this film finds a way to exist, to proceed with his life.

K: Both your parents and your grandfather were heavily involved in cinema [Livnev’s mother and father were both directors; his grandfather Evsei Goldovsky was one of the founders of the Moscow Film School]. How did that influence your career in film – to have had that grounding, but also the pressure that goes along with that background?

L: From the moment of my birth I was already on the list of future film school students. That was something that my mum was always pushing for. All the conversations at home were about movies, about film, so I am definitely not a self-made man. This route was prescribed to me and I followed it.

K: The team you assembled for this film is impressive. You’re reunited with Aleksei Serebryakov; Daniel Olbrychski has had a formidable career; and your cinematographer was Yuri Klimenko [Man Follows Birds, Hard to be a God], who is a huge name in his field and who won awards for his work on this film. What was it like working with them? Did you ring Serebryakov and say, “I’m back”?

S: For all these years when I was not directing we were still close friends. He was always pushing me, saying “you have to come back.” So when I had written just a few pages of the script, I sent them to him. It was just a couple of scenes. An hour later, his wife sent me a short video which she took on her phone without him knowing, through the door, and he was crying while he was reading. After this, I didn’t really have a choice. I understood that it really resonated with him. It wasn’t like he was playing a role, he absolutely committed himself to this film, like me – for half a year he didn’t take other jobs, he was preparing for this. He really became my partner.

With Daniel Olbrychski, it was very different. He came to the project a week before we started the shoot. There was no such role in the film originally. The script was about a son and a mother, not a father. But I was not able to find a mother. I couldn’t cast anybody. I started thinking: there are so few good actresses of this age, but there are some men, and Olbrychski immediately came to mind, [because] some time previously I had discussed another project with him. So I called him and said, I have this script, the character is a woman, but please read it and if you like it I will rewrite it in three days. 24 hours later he said yes, so I rewrote it and we started shooting without delay. The plot stayed more or less the same. Some things had to change, but I think for the better. It was pretty stressful but I liked the experience. I kept rewriting while we were shooting. He’s a very different type of actor compared with Serebryakov. Aleksei is an actor who prepares very seriously, he plans every gesture. Daniel is the opposite. He needs to just start and to find the ground while the camera is rolling. They were very different actors but they became very respectful of each other. There was a competition there, because each could tell that they were working opposite a big actor. That worked for the film.

[Klimenko] is an amazing director of photography and artist, but also an amazing person who became like a mentor to me. He gave me confidence, helped me where necessary, providing his experience. The wonderful thing about him was that he was only interested in helping the actors. He wasn’t interested in beautiful shots, beautiful pictures. I guess throughout his career he already did enough of those. At his age it was so refreshing to see a DP who, after a take, is like: how did he do that?! He was really with them. I think it shows. He was shooting the film, not the shots.

With Van Goghs, I didn’t need any genres, any style, any cinematic language. I don’t care how I express things, only what I feel

K: I want to ask you a little about the ‘90s. How did it feel to be starting your career in a period when the film industry in Russia was collapsing? You took over the old Gorky Studio in 1995 in the middle of the crisis. What was it like to become the head of a studio so young and at such a challenging time?

L: When I started directing, I didn’t feel like we were living through a catastrophe. On the contrary, we were full of hopes – we thought there would be a new Hollywood [in Russia]. Then suddenly it was a dip for ten years or so. But at that point I quit directing, so I didn’t personally experience that! I became the chairman of Gorky Studio because I had this dream of being at the helm of reforms. I wanted to get the studio privatised, I wanted to create a chain of theatres. Other people did that eventually, I didn’t. My dream was to create an industry. I think I’m the wrong person for that, because I’m not a good manager at all. I can inspire people but not manage them. And I think Gorky is still state-owned! My journey with [the studio] ended in 1998 after the financial crisis in Russia. At that point there was a feeling that the film industry was dead forever, that it would never revive. I thought there was nothing to do there anymore. That February I decided to try my luck in Los Angeles.

K: What sort of films did you envisage making at Gorky?

L: The vision was very simple: a film should not cost more to produce than it can bring in. A very fresh idea at that time! The idea behind it was to revive the film industry. Not the art, but the industry. It was not even a matter of economics, it was a matter of ideology. It was a very special time, not like today. Russia didn’t have any film industry – the old one was in ruins and the new one hadn’t been born yet. There were no theatres: the old theatres were functioning as furniture stores or car dealerships and new theatres hadn’t been built yet. You could not describe what we would usually consider a commercial film as “commercial”, [because] There was no broad audience at that time. Everything was very niche. 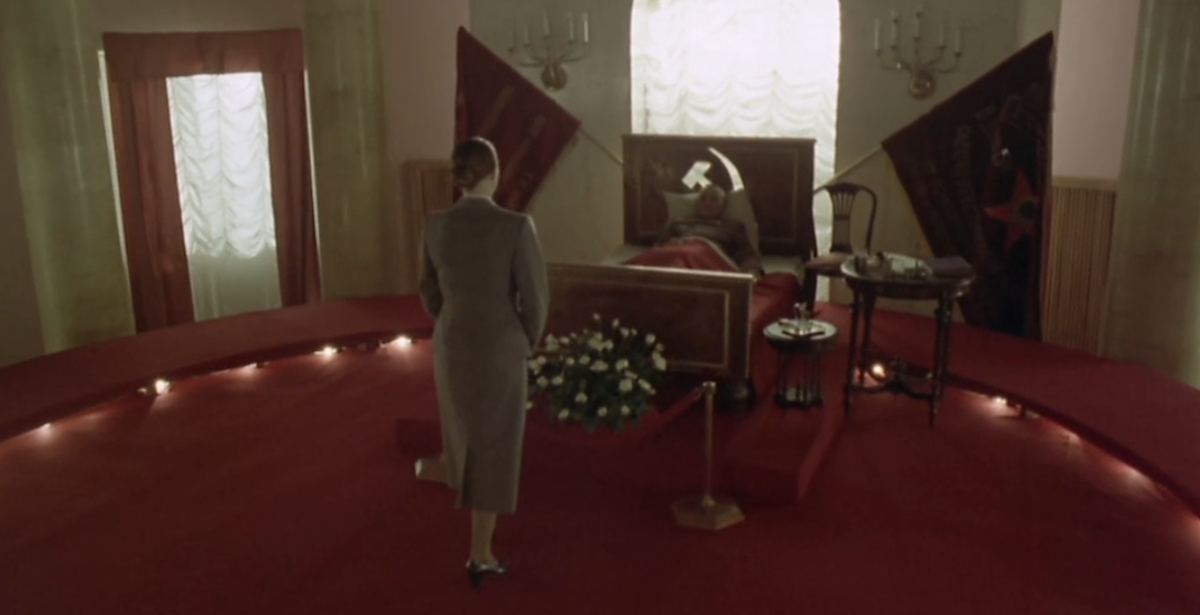 K: How do you look back at Hammer and Sickle now, after having gone through such a journey and arrived at a new way of making films?

L: I think the film was about me, but I was trying to hide behind the period piece and the story about the sex change operation, which was very strange for the time, particularly for Russia. But now I understand that it was about me. I was afraid of myself, I was scared of really opening up, showing who I am, what I feel, and this film is about somebody who is the same – someone who is hiding the very basics, hiding under a different name and sex, a different personality. So, without understanding it, it seems like I ended up speaking about myself.

K: I always read it as being a commentary on Stalinism, but of course you can remove it from that period aspect and think about it more broadly in terms of identity.

L: To me, it was the last Soviet film – a film that was exploiting Soviet myths, drawing the line [between Soviet and post-Soviet], and so on. But in addition to that, there was this background that was there without me realising it. I married two different ideas: my interest in making a film about the experience of a sex change, and my desire to make a film about the end of the Soviet Union.

Watch Van Goghs as part of Klassiki’s Pick of the Week selection from August 31th, and Hammer and Sickle in our permanent collection.