Stepanakert airport is a potent symbol of the absurdities thrown up by a drawn-out conflict like that in Nagorno-Karabakh. Built in Soviet times, the facility, located outside the capital city of the self-declared Republic of Artsakh (the Armenian name for the disputed region) has lain dormant since 1990, when the First Nagorno-Karabakh War was raging. Rebuilt in 2009, the airport has a full staff who carry out day-to-day maintenance of the building and runway – but no commercial flight has launched from the site for 32 years. Despite repeated assertions from local authorities that the airport will soon be up and running, the threat of Azerbaijani missiles targeting civilian flights has kept the planes firmly grounded.

As part of our ongoing season Spaces and Places: Exploring Armenian Identities on Film, Klassiki is screening two recent titles that each explore the conundrum of Stepanakert airport: Nora Martirosyan’s fictional Should the Wind Drop, about a French inspector dispatched to Artsakh to assess the airport’s potential for reopening; and Garegin Papoyan’s observational documentary Bon Voyage, which captures the daily work lives of the employees diligently maintaining this zombie institution. We spoke to both directors about their diverging approaches to the situation there and the symbolic significance of the airport to Armenian and Artsakh identities. 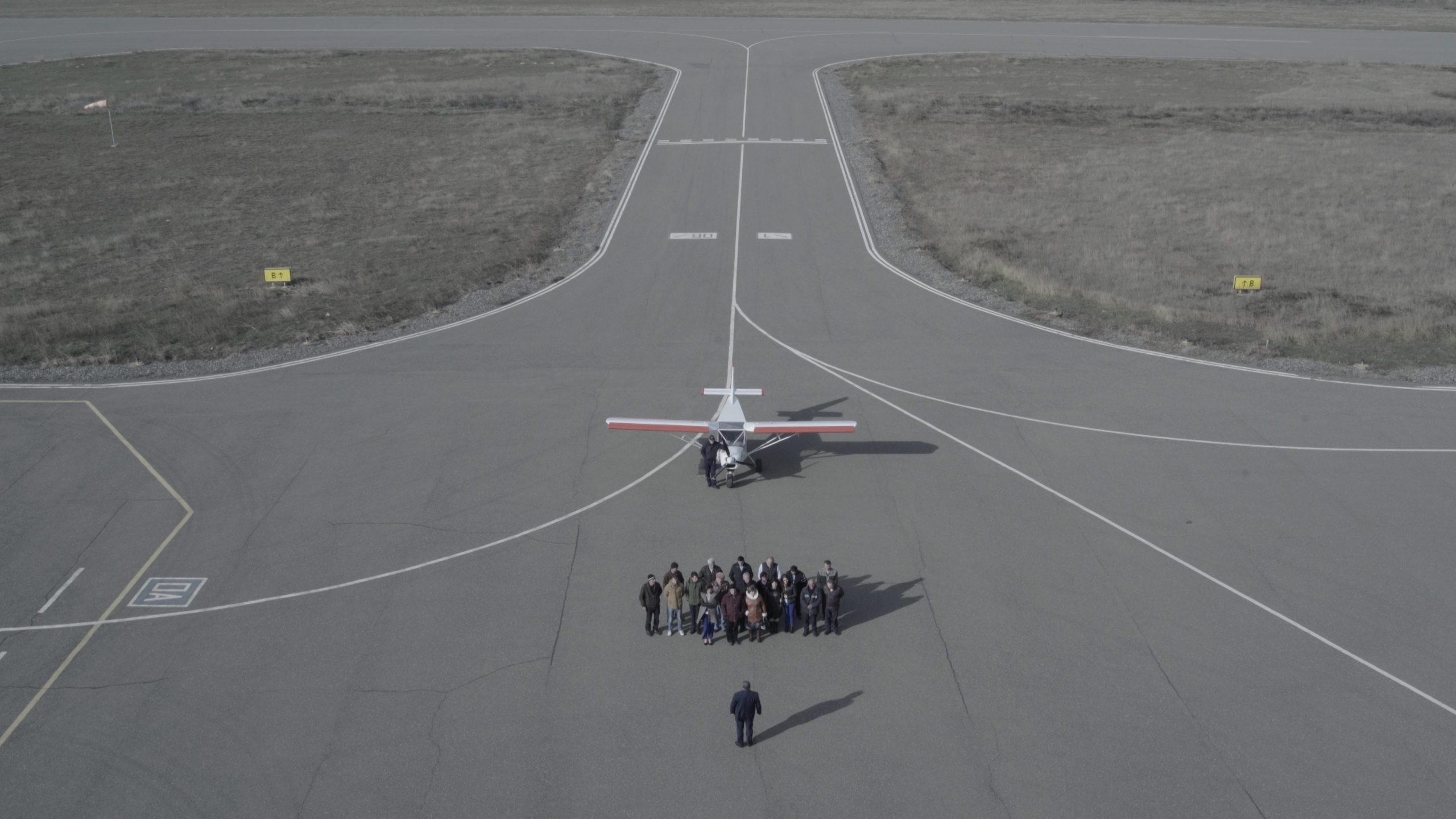 How did you each decide to make a film about the Stepanakert airport?

Garegin Papoyan: During my visit to Stepanakert in 2015, I began shooting my first short film, Skhtorashen. It was then that I had a chance to visit the airport and was surprised by the situation there. The absurd reality forced me to go deeper inside the subject to create a metaphor for Artsakh’s isolation from the world. By telling the story through the airport, an international symbol, I was aiming to reveal the sheer isolated absurdity of the situation.

Nora Martirosyan: The desire to make the film came from my acquaintance with this small self-proclaimed republic, where I went for the first time in 2009. Its name is Nagorno-Karabakh, or Artsakh in Armenian. When I got there, I realised that everything I see corresponds to a state, such as the parliament, the infrastructure, the roads and the cities. But if you look on Google Maps, the country doesn’t exist. I asked myself how this paradox can be shown in cinema and through what kind of a narrative. Then I discovered the airport and I thought that it is the perfect symbol for the self-proclaimed Republic of Artsakh which wants to fly, that wants to be recognised, but which is not allowed to do so. So, I wrote the narrative around the airport, with all the characters connected with it in one way or another.

One of these films is a documentary, and the other is a fiction film. Can you each explain how you settled on these modes of storytelling?

GP: The place and the people working there informed every aspect of our film; the atmosphere contributed to the language of the film. We wanted to show the stark reality on the ground in a way that invited the viewer in via cinéma verité: into the real, day-to-day life of the airport. To show its life, regardless of its inactivity, and the people who keep it alive.

NM: My idea was to use the reality, and through poetic means to transform it into a fictional story that respects the setting but allows the imagination to go beyond the narrow possibilities of the geo-political situation.

the airport, with its suspended activities, is a symbol of a country suspended because of geo-political games

Underlying both of these films is an understanding of the absurdity of the situation in Stepanakert more broadly, and in the airport in particular. Both films dwell on the state of suspended animation, the lack of movement or progress. How did you go about constructing compelling films in a location defined by its lack of action?

GP: You’ve hit the nail on the head with “absurdity”. The airport was in suspension, leaving the people and the planes in a perpetual frozen state in time. Illustrating Artsakh’s state through the airport made the story very appealing. In reality, it was this seeming lack of activity and continual state of expectation that expressed the sense of hidden anxiety regarding the present and the future, which is felt by so many citizens of Artsakh, and especially by the airport workers who I grew to know personally.

NM: As I said above, in my film the airport, with its suspended activities, is a symbol of a country suspended because of geo-political games. In the same way as this airport cannot serve the purpose it was built for – transporting people – the country is not able to function as a recognised country would.

How did you build narrative out of this material?

GP: We had a narrative structure in mind long before we started shooting. Being given access to shoot a documentary film at the airport, we followed day-to-day activities there, and we tried as much as possible not to interfere, instead just recording what was happening, staying true to the principles of cinéma verité as much as possible. 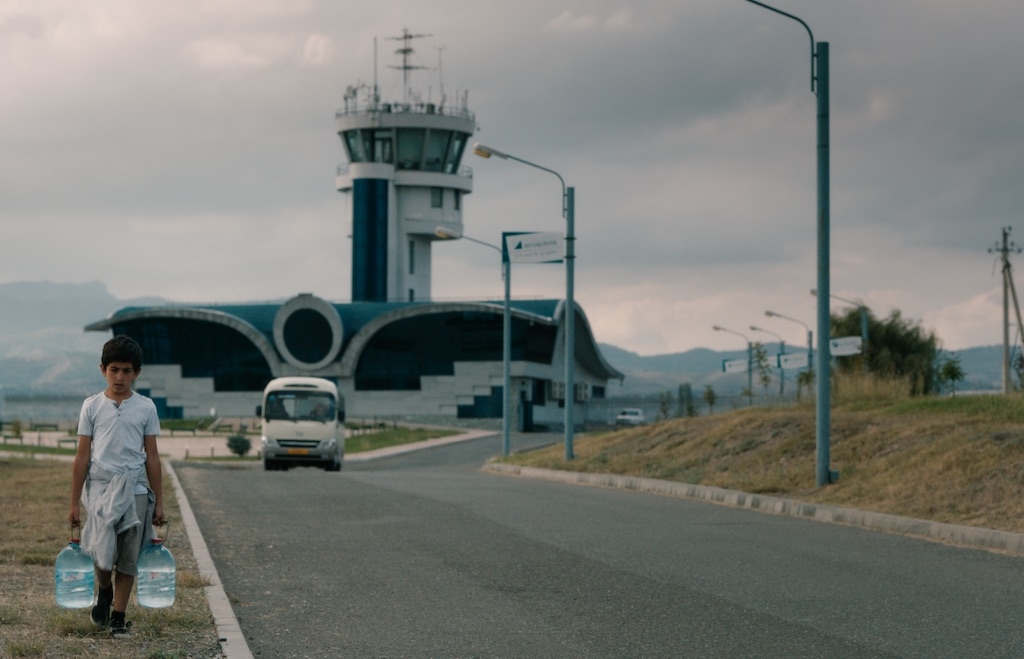 Hayk Bakhryan in Should the Wind Drop (2020), Nora Martirosyan

Can you each describe the atmosphere and the people in the airport on a day-to-day level? How do they relate to their work and the situation there?

GP: The atmosphere was simultaneously expansive and slow – the land in combination with the nature of airports, the stillness of it all. Yet, with the experiences of all of the airport workers disrupting the space, there was a sense of anxiety throughout. There was one character who said of the situation: “the cessation of war is not peace.” All of them were doing their daily routine with the dream that one day flights will start.

NM: In my film, actors play the employees of the airport, but their behaviour and dialogue are inspired by what I saw in that airport over the years: the employees act as if the airport will start functioning any day, they are ready to prove to the world that Artsakh is a state ready to be part of the international community.

Garegin, your film is explicitly self-reflexive at points: people acknowledge the presence of the cameras, sometimes openly stating when they don’t want to be filmed. How did you manage those tensions while filming and editing the material?

GP: It was difficult to get people not to pay attention to the camera at the beginning. As is natural, it takes time for people to adjust to your presence. But within a few days, the staff got used to our crew and the cameras, and our presence was very natural for them. By analysing daily shoots, we were constructing the story every night, sculpting the structure of the film as we were approaching the editing process.

Nora, your film is about a foreigner, a representative of “the West”, encountering Stepanakert. How did you go about working with Grégoire Colin on the part, and why was that outsider perspective so important?

NM: It was important for me to enter the country and the airport through the “Westerner’s” point of view – someone who has no emotional connection to the place and is there just to measure objectively the technical aspects, to assess the possibility of green-lighting the opening of the airport. Slowly, through his encounters with the locals, through the sympathy that he feels towards them and towards the country, his point of view changes. That is the main narrative of the film.

That juxtaposition of land and people is what creates the sense of absurdity: we’re in paradise and at the same time we’re destroying paradise

Both of your films seem to play on the distinction between what is elemental and what is technical or bureaucratic. There’s the almost sacred importance to the people in each film of both the land and the air; in Nora’s film, water and fire also play a symbolic role. Against this backdrop, you both focus in on administrative procedures, box ticking, management jargon. Can you speak a little about the contradictions produced by a location such as this and the symbolic value they have in your films?

GP: Artsakh is defined by its mountains first and foremost, and its people second. That juxtaposition of land and people is what creates the sense of absurdity: we’re in paradise and at the same time we’re destroying paradise. The presence of the people goes hand in hand with the land. The air is an obvious symbol for our sense of freedom, for flight, for life. The freedom to exist would be impossible without air.

NM: Indeed, Should the Wind Drop opposes a technical or bureaucratic approach to more humanistic values. The hope that allows people to continue living in this place raises them above the geo-political reality. As with everything in the film, the magical water coming from the toilets of the airport is an allegory. The boy who sells it believes in its magic power. So, it works: people drink that water and feel better. This stands for the whole film. If you believe strongly that Nagorno-Karabakh will be recognised, if you really hope, then maybe that fiction can be stronger than reality. This is the power of fiction.

Watch Should the Wind Drop on Klassiki from 19th May to 2nd June, and Bon Voyage from 26th May to 9th June. Bon Voyage is screening at London’s Ciné Lumière on Tuesday 31st May: buy your tickets here.