The Klassiki Companion is our occasional beginners’ guide to the key filmmakers, movements, and concepts in the cinema of Eastern Europe, the Caucasus, and Central Asia. In this edition, we introduce the oeuvre of Kira Muratova, one of the great Soviet and post-Soviet auteurs. 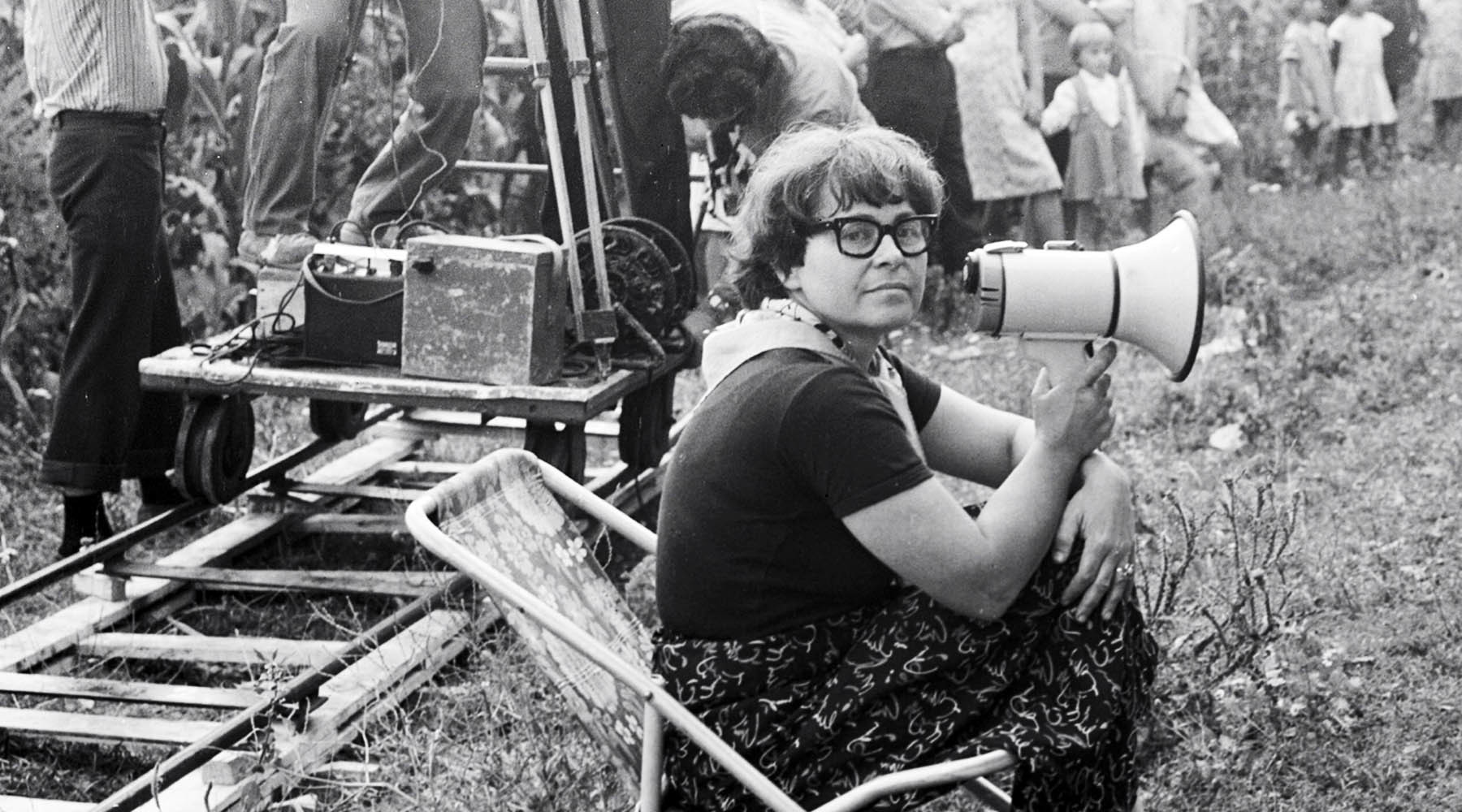 Soviet and post-Soviet film enthusiasts have long been familiar with Kira Muratova, a director whose oeuvre is slowly but surely becoming recognised globally as among the most influential and prominent cinematic works of the last 60 years. Born in the Romanian-speaking town of Soroca in present-day Moldova, the director grew up with influences from both her Russian father and Romanian mother, a duality that distinguishes her works. The director graduated in 1959 from the prestigious Gerasimov Institute in Moscow, commonly known as VGIK, one of the institution’s hallowed ranks of alumni alongside the likes of Larisa Shepitko, and Andrei Tarkovsky. Muratova (née Korotkova) moved to Odesa with then-husband and fellow director Oleksandr Muratov, with whom she co-directed her first two feature films, By the Steep Ravine (1962) and Our Honest Bread (1964); she co-wrote the former and appeared in the latter in a cameo. Aside from a brief sojourn in Leningrad, Muratova remained in Odesa until her death in 2018, and practically the entirety of her (almost exclusively Russian-language) oeuvre is associated with the city’s venerable Film Studios.

Her career proceeded in fits and starts but was ultimately prolific, encompassing 22 films spanning 51 years and defying the boundaries of genre; Muratova flitted tantalisingly between melodrama, art film, horror, and thriller. Indeed, critics have frequently invoked terms like polyphony – even cacophony – in an attempt to describe the free-wheeling, abrasive mood of her films, which are populated by motley crew of the desperate and deranged. Like Federico Fellini or Jean Renoir, she made a habit of utilising the same actors over again, forming a troupe containing genuine stars of the (post-)Soviet screen such as Nina Ruslanova (who Muratova discovered) and Renata Litvinova. Freed from the constraints of censorship after the fall of the Soviet Union, Muratova’s later career established her as a significant force in Russophone and Ukrainian cinema: the arch anti-sentimentalist of Odesa, our finest chronicler of the histrionic and the unruly. 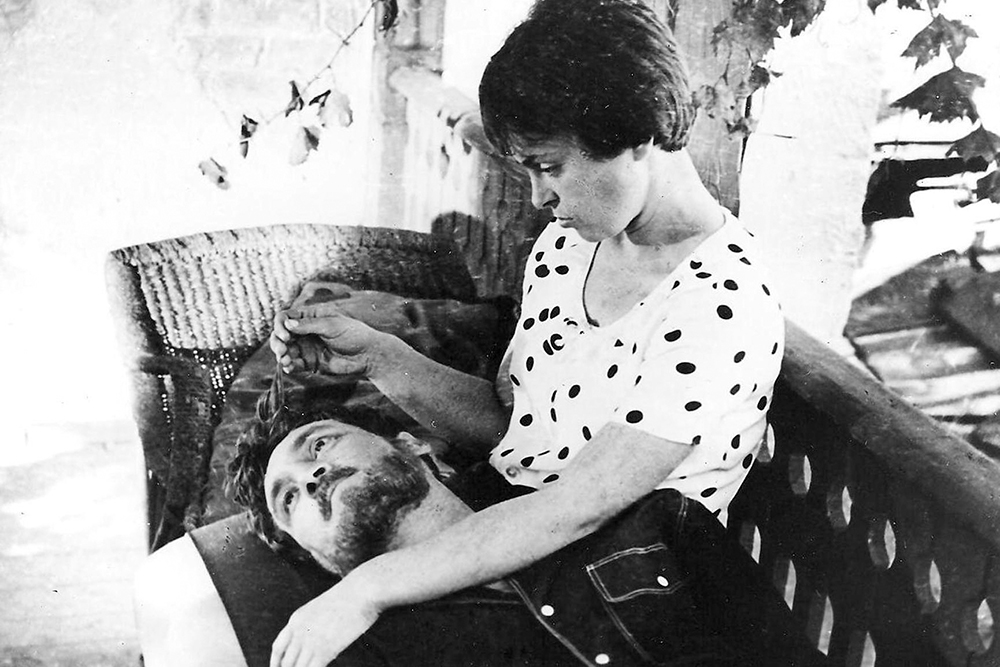 Following her divorce from Oleksandr, Muratova eventually made her solo directing debut in 1967 with Brief Encounters. Simultaneously dream-like and domestic, this is a romantic drama that explores the relationship between two women brought together by their love of the same man: travelling geologist Maksim, played by folk singer heartthrob Vladimir Vysotsky (commonly regarded as the Soviet Bob Dylan). Our protagonist and Maksim’s wife, Valentina, is a city bureaucrat played by Muratova herself. Unbeknownst to Valentina, her new maid Nadia began an affair with Maksim while working in a provincial diner. In a twist on the notion of the male gaze, Maksim only exists on the screen as a figment of Nadia and Valentina’s memory, or even imagination, creating a fantastical dimension that cuts through the underlying tension between the women. Often dubbed a melodrama due to its provincial setting (Muratova herself described the film as “Chekhovian”), Brief Encounters turns the genre upside down by refusing her characters the opportunity to change their status-quo; Nadia neither acts on her feelings for Maksim, nor opens up to Valentina.

In a foreshadowing of Muratova’s difficult Soviet-era career, the film was denied a wide release by censors, who were displeased with the characters’ obsessions with individual thought and feelings – the film opens with Valentina’s stream of consciousness voiceover pondering whether “to wash the dishes or to leave them?”. Muratova’s use of flashbacks to create a non-linear narrative was remarkably experimental for its time and provided Soviet cinema with a counterpart to its contemporaries in the French New Wave.

critics have frequently invoked terms like polyphony – even cacophony – in an attempt to describe the free-wheeling, abrasive mood of her films

If Encounters provoked frustration, Muratova’s follow-up, The Long Farewell (1971), prompted outright rejection. It was banned, marking the beginning of the end of her Soviet career before it had even begun. This melodrama will no doubt speak to fans of Pedro Almodóvar, focusing as it does on the strained relationship between a divorced single mother and her teenage son. In the face of Sasha’s withdrawal, his mother Yevgenia becomes overbearing and frantic. When Sasha and his mother are together in public, their problems bubble to the surface in embarrassing displays of frustration. We follow Muratova’s bleak take on dysfunctional familial relationship as it builds to a crescendo in its final scenes, and in a similar style to Brief Encounters, the pair stubbornly remain fermenting in their despondent realities.

Throughout this dramatic non-journey, Muratova’s early style comes into its own, her signature use of repetition harnessed in the most uncomfortable and surreal of moments; indeed, it was the maturation of this singularly Muratovian style that caused such aggravation among studio bureaucrats. To take two examples: Sasha’s sniffing his unrequited love’s ponytail and a sobbing Yevgenia’s refusal to sit down at a theatre performance are all depicted three times in a row, in three uncannily similar but clearly distinct takes. This play on variation and repetition has a jarring result, highlighting the most exasperating aspects of intimacy. This reiteration of movement and sound can be found elsewhere, from the words in Yevgenia’s feverish monologues, to the clunky piano theme from regular collaborator Oleg Karavaichuk that echoes throughout, to the camera’s lingering static shots of hands. 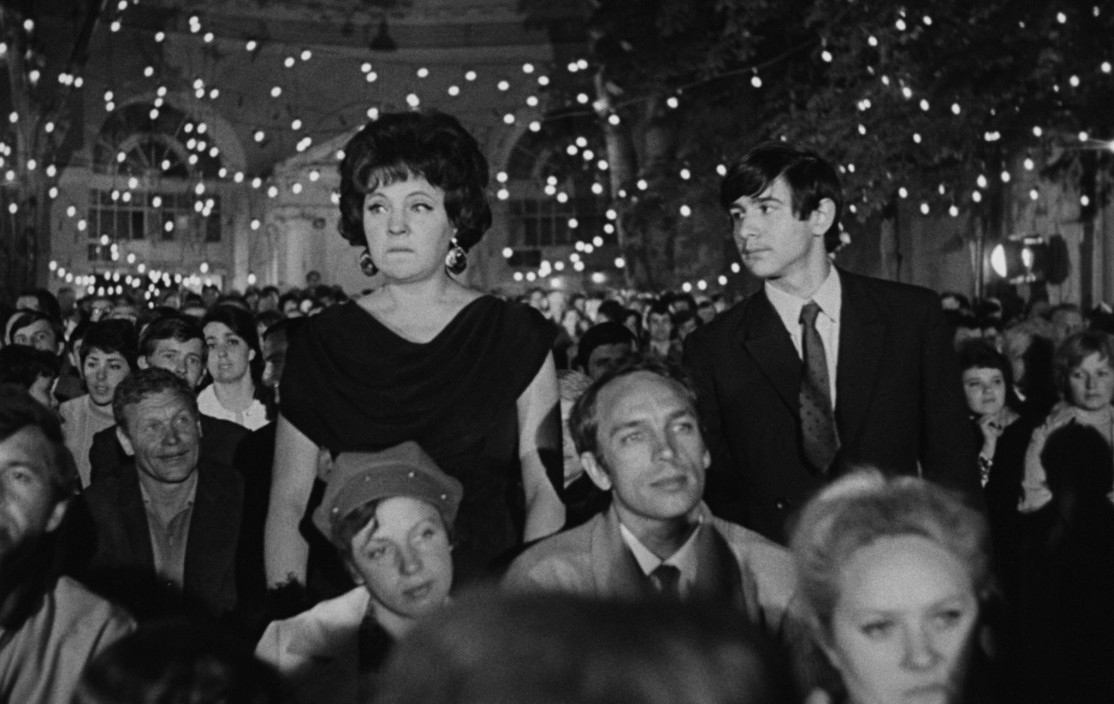 Zinaida Sharko and Oleg Vladimirsky in The Long Farewell (1971)

The wilderness years: Getting to Know the Big, Wide World

After Farewell, Muratova was persona non grata in Odesa. For almost two decades, until the slow death of the centralised Soviet studio system in the late eighties, she struggled to work on her own terms. A 1972 documentary co-directed with Theodore Holcomb, Russia, was an artless commission; a third feature shot in Odesa, Among Grey Stones (1983), was disowned by Muratova after the film was re-edited without her input by studio censors (she insisted that the finished film be credited to the fictitious “Ivan Sidorov”).

There was one moment of reprieve, however. In the mid-1970s, Muratova was invited to Leningrad to make a film with the city’s Lenfilm studio – the second-largest in the USSR, with a reputation for fostering the so-called “Soviet arthouse”. The result, 1978’s Getting to Know the Big, Wide World, is a gem of a film, a workplace romance that teeters on the brink between Muratova’s Chekhovian and avant-garde tendencies. Centred around a love triangle between workers on a construction site, featuring a metacinematic cameo from Soviet screen icon Lyudmila Gurchenko, and replete with the director’s idiosyncratic quirks of framing and editing, it stands now as a bittersweet reminder of what could have been in the barren middle period of Muratova’s needlessly stymied career. 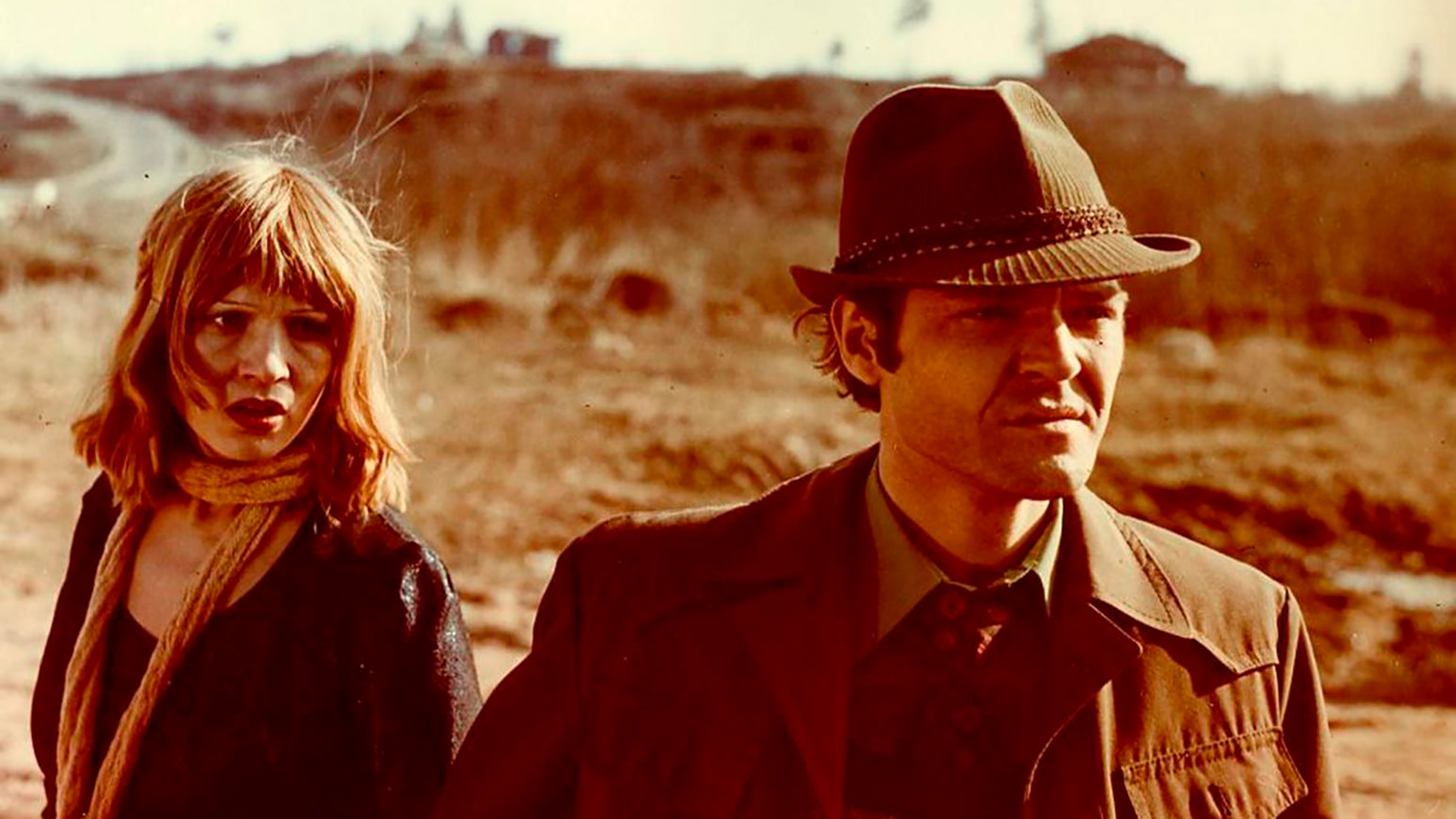 Nina Ruslanova and Sergei Popov in Getting to Know the Big, Wide World (1978)

Casual fans are most likely to know Muratova for her 1990 Silver Bear-winning feature The Asthenic Syndrome, completed, released, and promptly withdrawn from circulation in the Soviet annus horribilis of 1989. In 1987, Muratova’s early films were screened for the first time in two decades – an example of the “unshelving” of previously banned works during perestroika’s cultural reset – at which point Muratova was once again permitted to work on her own terms. The resulting film is considered by author Jane Taubman as the mid-point “Soviet Apocalypse” of Muratova’s filmography, dividing her career into a clear before and after. Syndrome was made at the height of the phenomenon known as chernukha, a cinema trend that both stylistically and narratively drew attention to the more pessimistic and visceral aspects of late Soviet life. Due in part to a string of obscenities muttered under the breath of a train passenger in the final scenes of the film, Syndrome was the first and only film to be banned during perestroika, a decision quickly reversed after its Berlinale win – a victory which to date has been perhaps the key driving force in putting Muratova’s films on the international stage.

her work was considered an example of “women’s cinema” by Soviet critics and its exploration of the hysterical, the depressive, and the banal has since been reclaimed by female writers as a powerfully thorny assault of normative gender pieties

This matryoshka of a film is split into two parts, seemingly linked only by the theme of “asthenia”, a condition defined broadly as a bodily weakness, fatigue, or suffering. The first half – later revealed to be a film within a film – is filmed in sepia monochrome and follows Natasha, a widow grieving her husband; the second half switches to colour, following teacher Nikolai dealing with offscreen personal and workplace issues. Natasha’s asthenic syndrome is displayed in erratic, aggressive, and at times sexually predatory outbursts that eventually cause her to resign from her job and push the people closest to her away. In sharp contrast, Nikolai’s asthenia-induced narcolepsy causes him to fall asleep in every imaginable situation, only to be admitted to a mental asylum. In step with the rest of her oeuvre’s contempt for clean binaries, Muratova undermines gender stereotypes throughout, with Natasha displaying characteristically masculine symptoms of depression and vice-versa. Though Muratova did not consider herself a feminist, her work was considered an example of “women’s cinema” by Soviet critics and its exploration of the hysterical, the depressive, and the banal has since been reclaimed by female writers as a powerfully thorny assault of normative gender pieties.

Muratova’s post-Soviet work is sometimes neglected by English-language critics for whom Asthenic Syndrome functions as a kind of full-stop on the director’s career. But by far Muratova’s most prolific years were the two decades following the collapse of the USSR, in which time she completed nine features. The eclecticism that had defined her style up to this point is given full reign in these films, which range from literary picaresque (Chekhovian Motfis, 2002), to grotesque black comedy (Three Stories, 1997), to her final, dizzying deconstruction of the act of filming itself (Eternal Homecoming, 2012). Picking one film from this extended victory lap as “representative” is a fool’s errand, and counter to Muratova’s own uncompromising free-spiritedness. But if pushed, one could do worse than Melody for a Street Organ (2009), perhaps the director’s most caustic treatment of lost innocence. 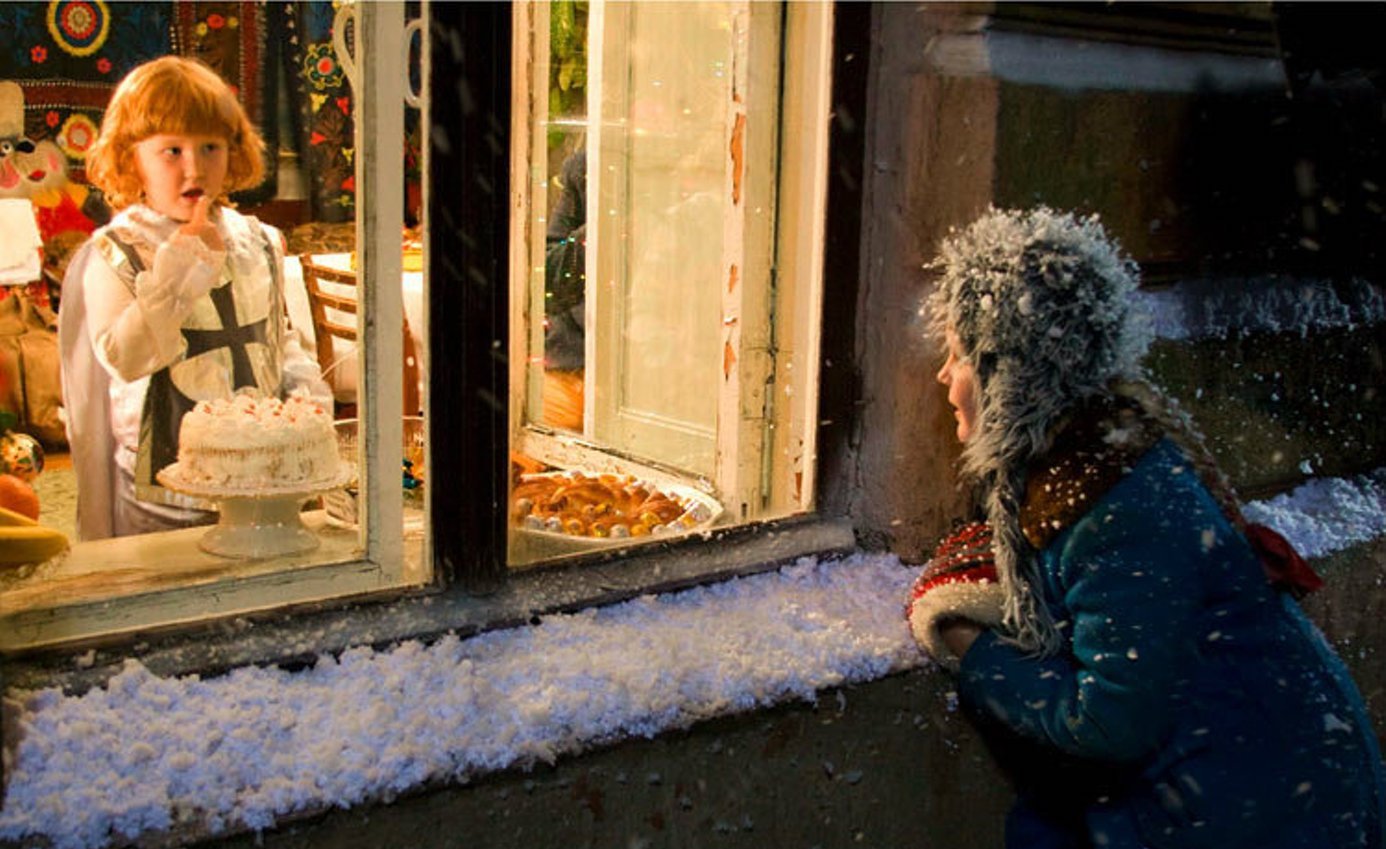 Revisiting the theme of parental bonds explored in The Long Farewell, Muratova’s penultimate film, a post-modern fairy-tale, is a seasonally appropriate but uncomfortable Christmas watch. Melody is her only piece of work set in Kyiv, and despite living nearly her whole life in Ukraine, it is also her first film with a significant amount of Ukrainian-language dialogue. The three-hour-long drama won a Nika Award in 2009 for Best Film from the CIS and Baltic states

With a backdrop of snowy windowpanes and seasonal exhaustion in all its glory, the story proper begins on Christmas Eve with a Ukrainian Christmas carol. Half-siblings Alena and Nikita escape their orphanage in search of their respective fathers. Heading first to the train station where they had heard one of their fathers was working, the orphans start their journey as they mean to go on, surrounded by a carriage full of humanity splayed out in all its ugliness. In a clear allegory for the moral vacuum left after the collapse of the Soviet Union, the children are worn down by endless encounters with unhelpful and unwilling city dwellers, from train station workers to supermarket cashiers, to other children. Typically, this tale is not a happy one – in her later years, Muratova leaned into ever more grotesque themes, and these orphans subjected to fittingly Dickensian cruelty at each stage of their journey.