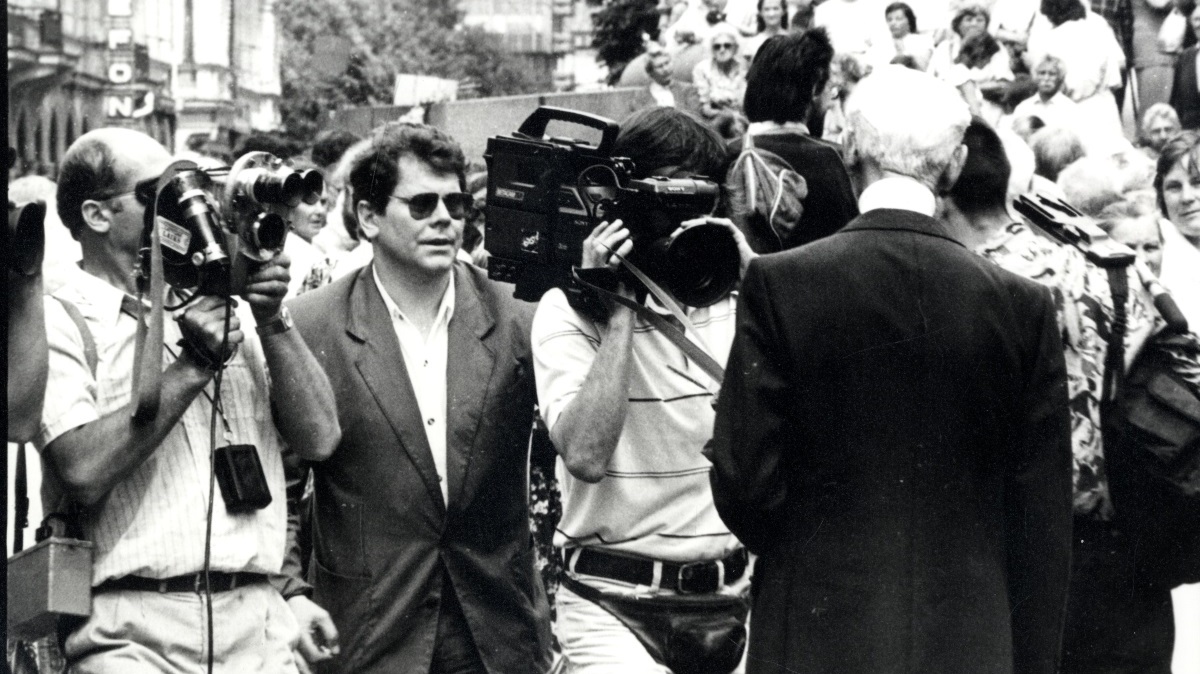 Juris Podnieks during filming of Is It Easy to Be Young? in 1986

“Today, there is nothing to die for, nothing to fight for, and nothing to live for,” says a young participant in an honour guard ceremony at a war monument in Is It Easy to Be Young? (1986). The groundbreaking documentary by Juris Podnieks captures the experience of those coming of age in ‘80s Latvia under Soviet rule, and shocked Eastern Bloc audiences with its frankness. Subtitled “About Those Looking For Their Place In The World,” it portrays a generation struggling to find meaning in a society of dead-end options, ruled by fear and repression, and its interviews with a cross-section of youth included punks, disabled war veterans, and others rendered invisible by Soviet propaganda. It pinpoints tension between former generations who believed in heroic patriotism and sacrifice, and those growing up in a still-militarised society in which the lofty words of authorities were no longer convincing.

Is It Easy to Be Young? caused a global sensation: it was seen by over 28 million people in its first year, and was bought by 85 countries. Its timing positioned it to not only insightfully document, but also play an active role in catalysing the profound historical transition underway in the Soviet Union. Mikhail Gorbachev, who hailed the film as “the first bird of perestroika,” had come to power in 1985, and initiated glasnost, a policy of new cultural openness, alongside his liberalising economic reforms. Social problems that had previously been taboo, such as rampant drug addiction and the heavy psychological toll of the war in Afghanistan, feature uncensored in the documentary. Podnieks engages in eye-level dialogue that is rare for his subjects, who feel misunderstood and patronised by their parents and social institutions and are frequently shown at combustible loggerheads with them.

It may not be easy to be young anywhere — but the stakes are especially high, it becomes apparent, in Soviet society

“The noise grows loud, until it eats us up,” snarl Perkons, a Latvian rock band that the authorities had banned in 1983. By 1985, they were permitted to play in Ogre, a small town outside Riga, to a crowd of around five thousand. Footage from the concert shows a fascinating divide. Some kids have given themselves over to the music and a swelling sense of abandon, throwing up their hands and screaming, while others stand stock still, looking around nervously for signals of disapproval from the visible uniformed presence. The gig quickly became infamous, as more than a hundred concert attendees vandalised two train carriages on their way home, smashing lights and windows. Seven young men were charged, bearing the brunt of punishment for those participating in this release of rebellious energy. Podnieks was granted access to the courtroom, and filmed Raimonds Plorins, the only one over juvenile age, breaking down as he was sentenced to three years of hard labour. There was little compassion for rulebreakers: in another scene, a sixteen-year-old accused of stealing a dress she had taken from a display for a rooftop photography session is harshly lectured at a police station after throwing herself out of a window during interrogation. It may not be easy to be young anywhere — but the stakes are especially high, it becomes apparent, in Soviet society.

Juris Podnieks had an early introduction to filmmaking thanks to his father, who was a radio announcer and was employed as a narrator for Latvian documentaries by the Riga Film Studio. Juris began working there, too, when still a teen, and was attached to projects as a cinematographer by 1972, when he was 22. Latvia, like the other Baltic states of Lithuania and Estonia, has become world-renowned for its tradition of poetic documentary, a spiritually inclined cinema that trusts in images to convey the essence of the truth. Podnieks, who studied at Moscow’s famed film school VGIK, had his sensibility forged while working as a cinematographer on works by seminal Latvian documentarian Hercs Franck — including his landmark short Ten Minutes Older (1978), consisting of close-ups of children’s faces as they watch a play. As a documentarian, Podnieks retains the interview format, not taking full flight into lyricism as he delves for facts, but eschews the feigned certitude of propaganda in favour of open questioning and reflection, often showing himself and his crew in the frame. His mid-length film Constellation of Riflemen (1982) had already demonstrated his concern for exploring subjective emotion and experience. He interviewed elderly men who had fought in the Latvian riflemen’s corp in the First World War and, having turned away from nationalist stirrings to back the Bolshevik revolution, were now disillusioned. 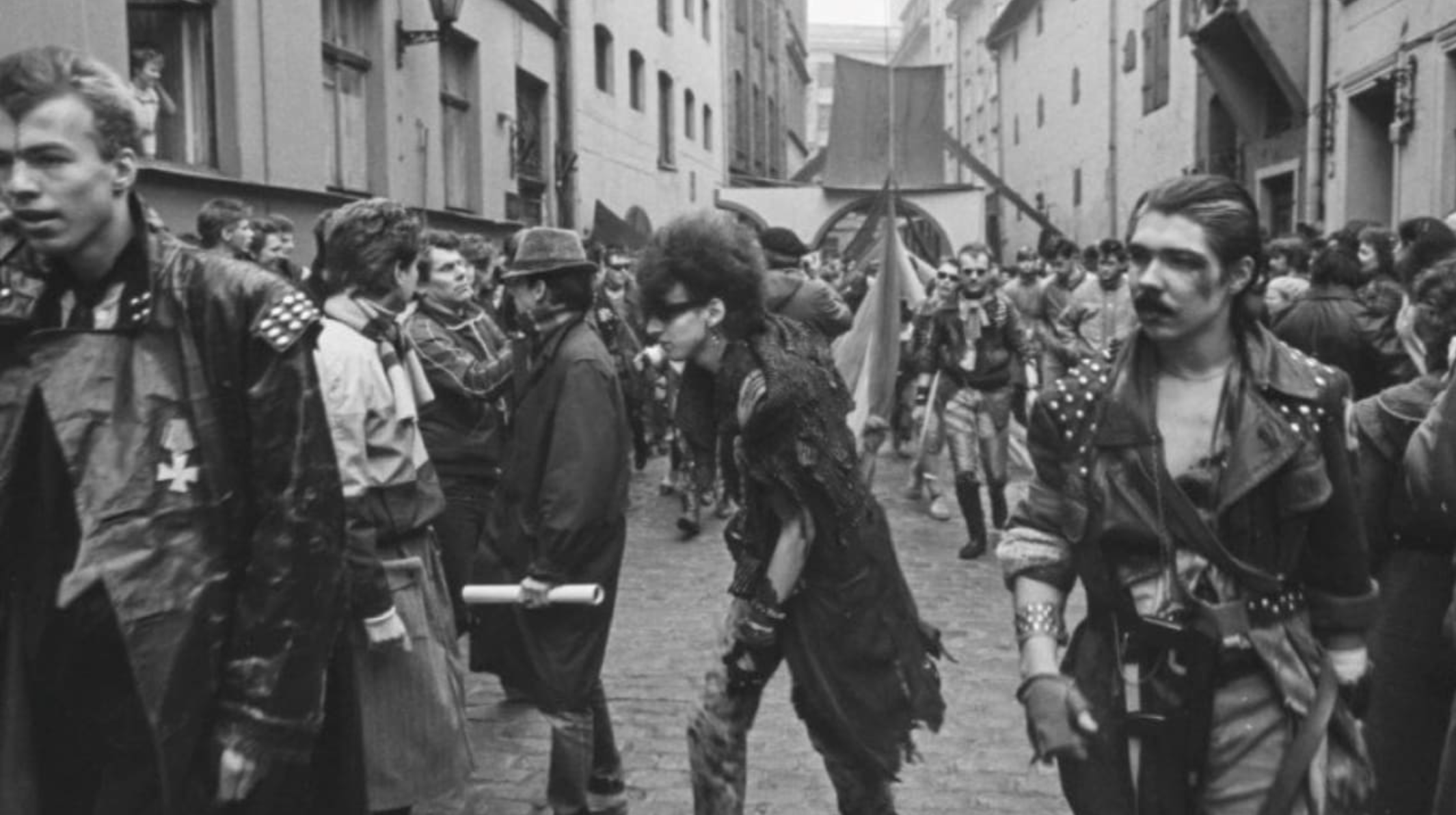 Citizens whose thoughts go against the official narrative are at the heart of Is It Easy to Be Young? Despite stern disapproval, numerous alienated youths were not willing to conform to establishment dictats. A subculture of like-minded punks don studded leather and teased their hair in an attempt to shock older generations out of their complacent hypocrisy. They tag buildings with graffiti, and declare themselves the product of society’s dishonesty. Some youths strive for meaningful employment (we hear from a medical student paid a pittance to work in a morgue); others seek spiritual connection (a follower of Hare Krishna, a faith discouraged by the state, muses on his search for answers). Still others pursue expression through art. A dark, surrealistic film is being shot within the documentary, as Igors, a recent school graduate, represents the uncertain future of his peers as a labyrinth, stalked by death, personified as a figure in black. Many of Igors’ friends have been lost to addiction, and drug users populate the phantasmagoria, as well as a woman in a gas mask on a beach, embodying the ever-present nuclear threat.

The shadow of the 1986 Chernobyl disaster hangs over the film, as does the devastating legacy of the Soviet-Afghan conflict, which left those returning from compulsory military service permanently changed both physically and mentally. Away from official pomp, there was no real media acknowledgement of the human cost of an ongoing war that seemed to have no end in sight. A young mother who has just given birth describes the gnawing fear the Soviet nuclear catastrophe has instilled in her; the horror of imagining her daughter could someday die just from eating an apple from a tree. Young soldiers barely out of their teens who have seen active service find they cannot readjust to the civilian world, and resort to the numbing effects of heavy drinking. People do not mature in war, but grow old, astutely observes one, who senses the ease of his childhood abruptly gone. Is It Easy to Be Young? is also, then, a painful record of lives shattered by the cataclysms of late Soviet history.

Podnieks retains the interview format, but eschews the feigned certitude of propaganda in favour of open questioning and reflection

After Is It Easy to Be Young?, Podnieks captured on film the growing protests for self-determination that led to the Baltic states breaking free of the Soviet yoke — and in the winter of 1991, while covering clashes in Riga between demonstrators and Soviet special forces, his cameramen Gvido Zvaigzne and Andris Slapins were fatally shot. Podnieks himself drowned, tragically, in a diving accident at Latvia’s Lake Zvirgzdu in 1992, not even a year after Latvia restored its independence. He, along with some of his collaborators, did not live to see Latvian society transformed in the ensuing years, or how the protagonists of his landmark film would fare — two sequels were produced by his editor, Antra Cilinska: Is It Easy to Be? in 1998, and Is It Easy? in 2010 — but his open curiosity and commitment to authentic expression unbowed by tyranny provided instrumental momentum.

Watch Is It Easy to Be Young? on Klassiki from August 11.