The Politics of Watching: documentary visions of the Ukrainian East 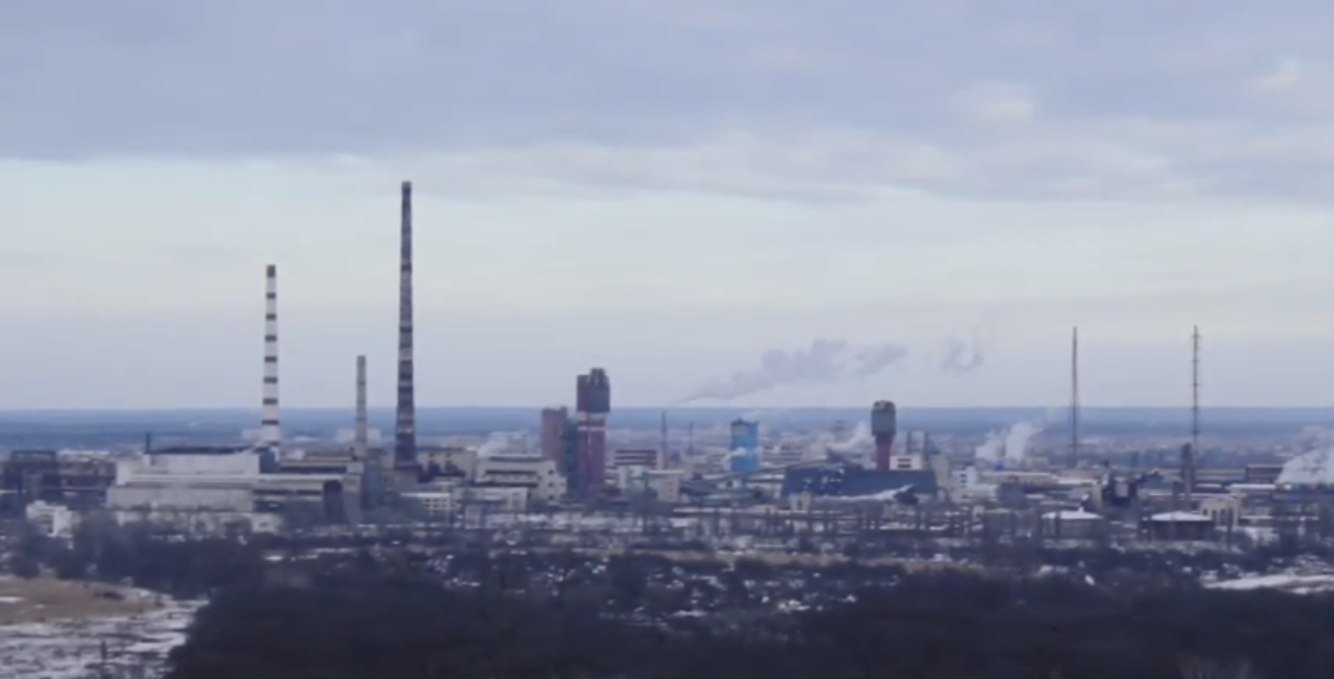 Since 2014, when Russia began its war on Ukraine in Donbas, visual representations of the eastern region have constantly circulated in film, television, and social media. As Oleksiy Radynski has pointed out, engagement with video documentation through social media is a definitive feature of the way we experience this war. Many of those consuming these visuals, whether on Twitter, BBC, or in cinemas, have never visited Donbas, and know it only from images and videos made by journalists, documentary-makers, and by witnesses of violent events. While some recently-produced films attempt to question and subvert power relations between viewer/filmmaker and the subject of the gaze, as spectators we have to remain conscious of these power imbalances, especially when watching a region that has been invaded and under occupation for the past eight years. Radynskyi states that filming is an act of participation. What kind of participation, then, is the act of watching Donbas on screen? In the context of the ongoing Russian violence against the region, which destroys localities, communities, and environments, watching Donbas on screen is a more political experience than ever. Today we must ask ourselves: what are the politics and ethics of each particular act of filming, each act of screening? What does it mean to watch Donbas on screen now?

The Russian occupation of parts of Donbas in 2014 resulted in greater attention being paid to the region both inside Ukraine and globally. Researchers turned to study the history and culture of Donbas in an effort to better understand what was happening in the region, including studying its historic and contemporary representations on screen. Perhaps the most internationally well-known of these representations is Dziga Vertov’s experimental 1930 documentary Enthusiasm. Today, Vertov’s film maintains a canonical status, and for many viewers, especially outside Ukraine, it remains one of the first visual encounters with Donbas beyond mentions in the news.

The film takes its name from the Soviet concept of “enthusiasm,” referring to the state of revolutionary fervour for the communist project. Along with optimism, energy, and rebelliousness, enthusiasm was thought to be one of the qualities necessary for forging a revolutionary society. By the time Vertov made the film, “enthusiasm” had become a state slogan, a watchword for the super-human efforts that were required of the communist workforce to drive the project forward. The film includes many representations of this “enthusiastic” state: labourers hurry across the constructivist verticals of factory bridges to get stuck into work; deliver impassioned, stuttering speeches about the need for an industrial great leap forward; tirelessly push wagons of coal along rails and haul lengths of steel from furnaces. This is the enthusiasm that would eventually be projected by the communist state onto the Soviet proletarian hero, Oleksiy Stakhanov, a labourer at the “Central Irmino” mine in the Luhansk oblast, around whom a cult of industrial overproduction would be constructed.

the region has often been seen through a binary, where from enthusiasm to despair there seems to be a dangerously direct and uncritical line

As Oleksandr Teliuk points out, Enthusiasm received its canonical status within the history of film not only because of its focus on Soviet crash industrialisation, but because it was one of the first experiments to record sound in situ. Vertov, who always produced his films in collaboration with his much less celebrated partner, Elizaveta Svilova, was fascinated by the mechanical sounds of the region, and organised them in a symphony of sorts, where the bodies of miners, the speeches of “strike workers” (or udarniki), and clink and clank of metal mine shafts form one impressive soundscape of industrialisation. In Enthusiasm, the industrial breakthrough featured on screen is mirrored in Vertov and Svilova’s avant-garde use of sound. As Teliuk suggests, Vertov’s documentary is one of the only times in the history of Ukrainian Soviet cinema when Donbas finds itself at the centre, not at the periphery.

While today the film is in the canon of both Ukrainian and Soviet film history, when originally released, it received mixed reviews, being criticised by some for being too flatly propagandistic, and by others for being not socialist enough. Vertov was also criticised by Ukrainian intellectuals for representing Donbas without Ukrainians. Though Ukrainian language is present in the film, particularly in the intertitles, as well as on posters and banners carried by the workers, for a film known for its pioneering use of sound, we mostly hear Russian language (with only minor exceptions). The film’s language politics raise questions that remain relevant today about how the region is constructed by outsiders, including Vertov and Svilova, born and raised outside Donbas and Ukraine, and those many (foreign) viewers who have celebrated the film as the definitive twentieth-century document of Donbas.

What kind of imaginings of the region does Vertov’s film communicate today? Enthusiasm fits traditions of depicting the region as an exoticised abstraction, something to be wondered at, emulated, and feared. Since the discovery of coal in the late-eighteenth century, outsiders have obsessively documented Donbas in word and image, as a means of colonising knowledge and controlling the meaning and therefore the status of the place in a broader political context. The same could be said of many industrial regions of the UK, such as Ebbw Vale, Durham, or West Lothian in Scotland, which are synonymous in the British imagination with their mineral makeup: iron ore, coal, and oil shale, respectively. Donbas, within the Russian Empire, the Soviet Union and, since 1991, independent Ukraine, has likewise had one overarching meaning: coal and steel. This identity was definitively ascribed to it in the nineteenth century, when European capitalists flooded into Donbas to exploit the region’s emerging industrial markets. It was developed across the Soviet twentieth century, when Donbas became a flagship of industrial production and local miners became the poster boys and girls of communist propaganda. 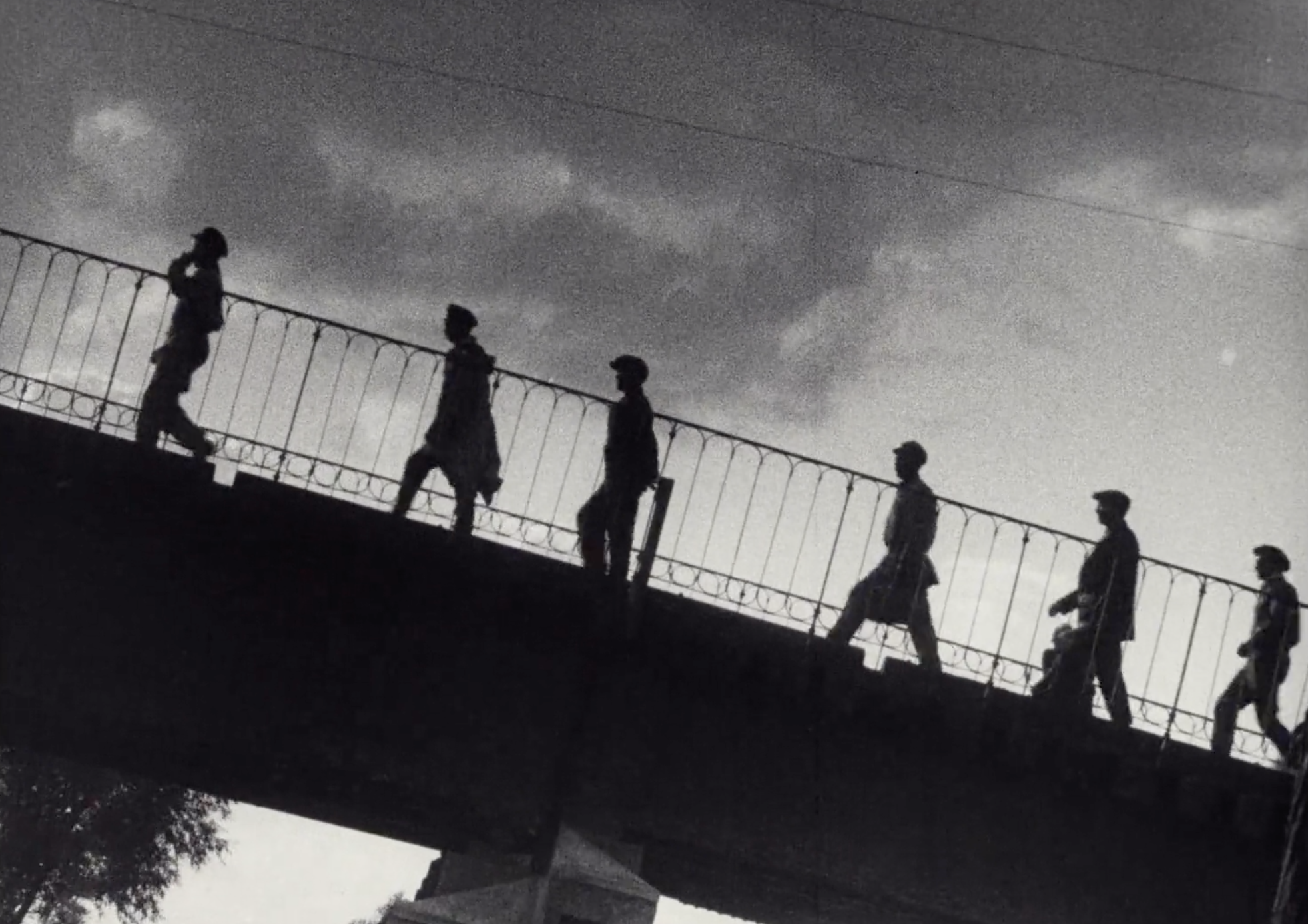 After the fall of the Soviet Union, the industrial myth of Donbas was inverted, but remained in place, as the closure of many mines and factories fixed it in national consciousness as a place of de-industrialisation and economic collapse, with the war further petrifying imaginaries of destruction. The canonical legacy of Enthusiasm is echoed in the 2018 documentary by Igor Minaev, Cacophony of Donbas, which aims to deconstruct heroic proletarian visions of success, substituting them with images of misery and decay. Viewed together Vertov’s and Minaev’s films create a binary through which the region has often been seen, where from enthusiasm to despair there seems to be a dangerously direct and uncritical line.

While one of the lesser known works in his oeuvre, Vertov’s Enthusiasm is undoubtedly the most canonical cinematic depiction of Donbas, and one which is attracting increasing attention now that the region is once more a site of Russian atrocities in the war against Ukraine. At the same time, the legacy of industrial mythmaking and the realities of war have also become a focus for independent filmmakers currently working in the region. This less canonical body of film, among which can be found The Road Back (Povernennia, 2013) by Aleksandr Ratiy, Svetlograd (2017) by Alina Yakubenko, Watching War (A Film Found on the Internet) (Smotret’ voinu (fil’m, naidennyi v internete, 2018) by anonymous, and Mustard in the Garden (Hirchytsia v sadakh, 2017) by Piotr Armianovski, presents a different vision of Donbas, beyond the binary of industrial success/post-industrial decay, as well as dominant war imagery. As scholars of Donbas, and individuals who know and love the region, we urge viewers interested in learning more to search beyond the most canonical works, and to follow the cameras of authors who are intimately familiar with this place.

Watching Donbas on screen with openness and a willingness to listen, but always cognisant of the politics of watching, might lead us to a different understanding of the region

Since the new escalation phase of the Russian invasion of Ukraine began in February 2022, Freefilmers have organised a number of solidarity screenings around the world. Among the films screened at these events were 2018’s Revitalization of Space (Vy sho tut metall voruete? (Vidnovlennia prostoru)) and Eastern Ukrainian Dialogue (Sho sho? Skhidnoukraiinskyi dialoh), collaboratively produced by Sashko Protyah and Oksana Kazmina as part of the TvorchSkhid/Creative East project. The films feature members of the collective travelling around Donbas and engaging people in dialogue about the buildings, legacies, and identities of the region. The filmmakers are often present on screen: we see one of the directors, Sashko Protyah, with a microphone and headphones interviewing people and hear his voice commenting behind the scenes. There is no authoritative narrative about the region presented in these films; instead we are invited to follow the narrative construction of place in collaboration with local communities, joining the filmmakers on their adventures and enjoying with them their social encounters.

Freefilmers’ solidarity screenings also present a particular experience of watching. Often screened in makeshift spaces – galleries and cafes that opened their doors in support of Ukraine’s resistance – people stand up to get a better view of the screen and sit crowding the floors. Screenings are usually accompanied by a video introduction by one of the members of the cine-movement, addressing a particular audience and sharing recent news. Since the escalation, many of the films resonate with audiences in new ways. Oleksandr Surovtsov’s Totally Stranger (2018) set in and around Mariupol, for example, is a sombre and gentle exploration of loss, which takes the viewer around overgrown abandoned spaces, a cemetery, and a field with a distant view of the Azovstal plant. The film resonated strongly with audiences, who seemed almost to be holding their breath as the camera flaneured with the protagonist, and met the film’s ending with a heavy, overwhelming silence.

Since the February escalation of the war, Freefilmers have been building on their horizontal support networks created through filmmaking to help people on the ground in Ukraine. They have also been continuing to make films, together with residents of Mariupol who were trapped during the Russian siege and, since the occupation, with the minivan drivers who deliver aid to the East. Solidarity screenings are meant to share these stories, as well as create structures that allow viewers to support communities across Ukraine, both emotionally and financially. 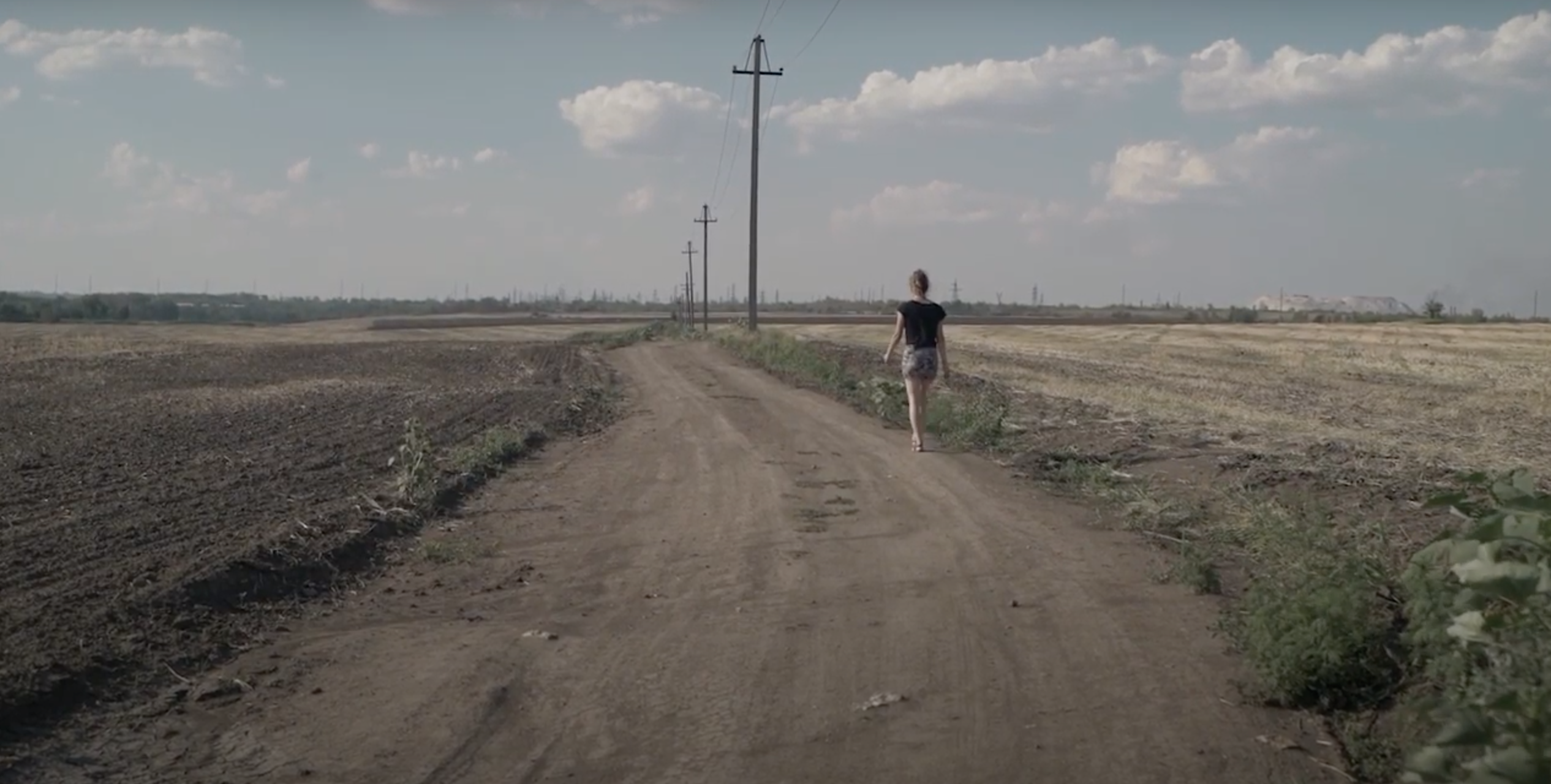 At the time Vertov’s Enthusiasm was released in 1931, a popular way of screening films in hard-to-reach parts of the Soviet Union was the agitpoiizd or agitational propaganda train. People would gather around railway lines to see idealised visions of themselves in documentary works such as Enthusiasm projected magically onto screens inside train carriages. Screening in this case was a vehicle for social engineering: communities were supposed to understand themselves through the images they saw on the screen, to aspire to become these ideologically perfected versions of themselves. Today, the politics of watching are very different. In the hyper-mediatised context of the war, it is tempting to think that we can fully understand the cultural contours of Ukraine and to indulge in just one reality of the place: war, resistance, victimhood. But this is clearly an abstraction that is in part produced by the politics of the contexts in which we watch, where we may wish to identify, for example, as sympathetic, kind, or generous. In the solidarity screenings that we write about above, one of the intentions is to draw attention to this impulse and to problematise it. As Sashko Protyah says in his opening voiceover to Eastern Ukrainian Dialogue, “No one can completely understand everyone. But it is always good when we are ready to look for common ground. And we really do have this kind of openness, the desire to understand each other.” Watching Donbas on screen with openness and a willingness to listen, but always cognisant of the politics of watching, might lead us to a different understanding of the region and perhaps even a differently informed engagement.

To support Freefilmers with their volunteering work, please consider donating to them, or reach out to them to organise a solidarity screening at freefilmers.ua@gmail.com.