Falling through rugs: Jirtdan and the rediscovery of Azerbaijani animation

Azerbaijan is not well known for its animated film. But the recent rediscovery and restoration of the 1969 short Jirtdan, long presumed lost, has prompted a fresh interest in the history of Azerbaijani animation. With this new version of Jirtdan now screening on Klassiki, we have invited two key figures in its production to reflect on the restoration. Below, filmmaker, author, and founder of the ANIMAFILM International Animation Festival Rashid Aghamaliyev considers its troubled production history and its place in the still-misunderstood history of Azerbaijani animation, while film historian Daniel Bird discusses its magical qualities and its engagement with national folklore and artistic traditions. 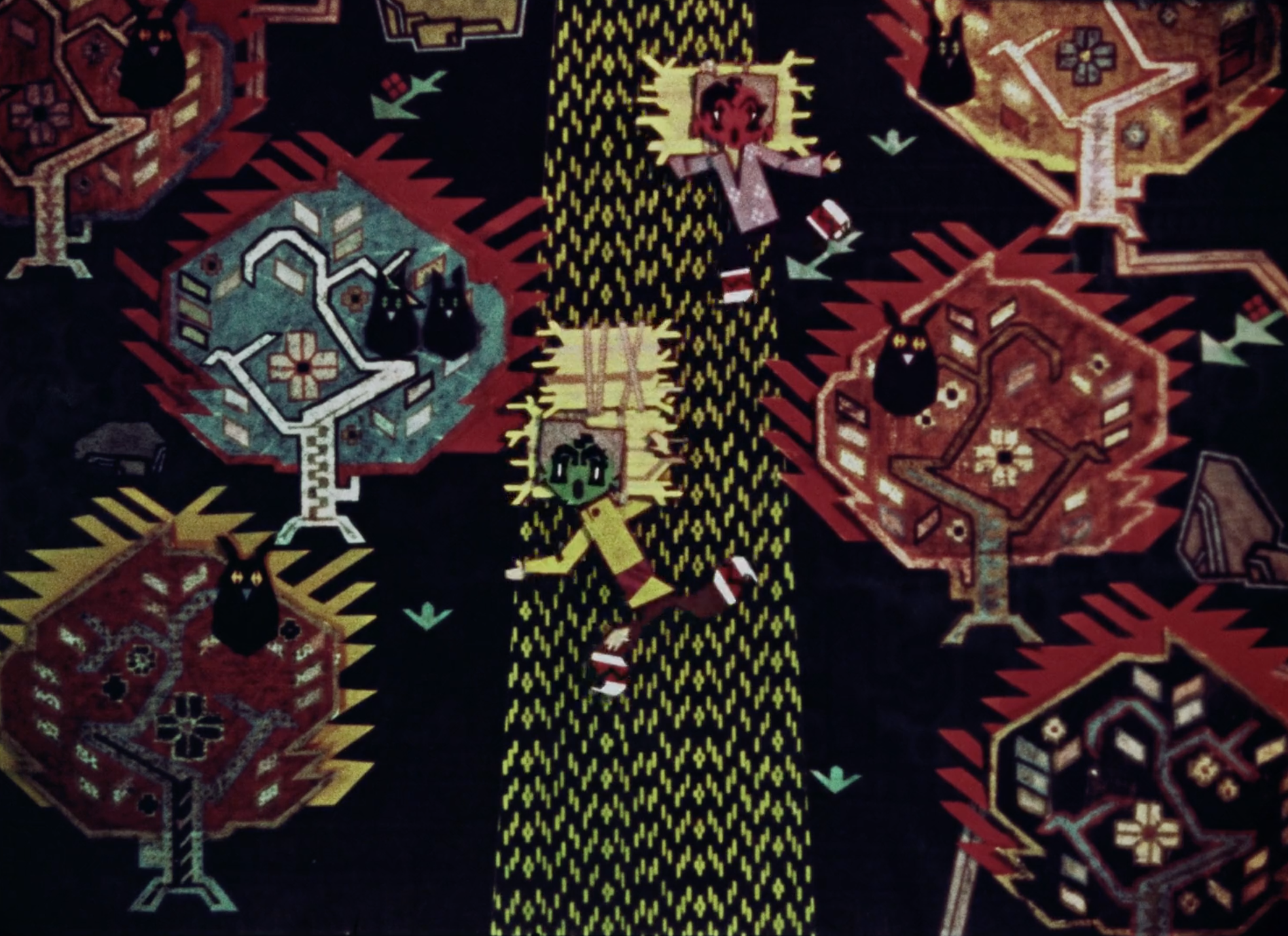 Jirtdan is a short animated film which heralded a new era for Azerbaijani animation in 1969, and which was recently rediscovered and restored. I was fortunate to be part of this process and to interview the creators of the film.

The history of animation in Azerbaijan is not extensive, but there are important precursors to the boom in creativity signalled by Jirtdan. Animation as a medium was first used in documentary films such as Cat, Lokbatan and Oil Symphony (all 1933). The purpose of such “technical” animation was to show the principles of oil platform operation.

In 1935, an animation workshop was established at the national Azerbaijanfilm Studio (at that time Azerfilm), and the film The Misfortune of Abbas was made, which can be considered the first Azerbaijani animated film. Unfortunately, the film is considered lost. In the early 1940s, there a production of The Adventures of Sinbad the Sailor was aborted because of the outbreak of the Second World War.

In the 1960s, at Azerbaijan Television, director Rasim Ismayilov and cinematographer Vagif Behbudov created an instructional animation for children titled Talking Lights (1965), as well as the political allegory Reds, Blacks and Others (1969). Finally, in 1969, Jirtdan was produced: the first Azerbaijani animated film intended for children. This film launched (or “relaunched”, as some local scholars claim) the regular production of animated film at Azerbaijanfilm.

Interestingly, Jirtdan could be called a student film, the result of a three-year animation course (1966-1968) initiated by studio director Adil Isgandarov and led by Jirtdan’s co-director Aghanaghi Akhundov. Around 20 students were taught by Akhundov, Bahman Aliyev, and Nazim Mammadov. Among their number were successful future animators and directors of the ‘70s and ‘80s: Elchin Hami Akhundov, Rauf Dadashev, Vagif Mammadov, Gennadiy Tishchenko, Tahir Piriyev, and others.

In 2016, when I started writing a book on Azerbaijani animation, researchers still claimed that the film was lost — some even stated that it was never completed

While researching Jirtdan, I discovered that the identities of its creators were unclear. Just after the start of production in 1968, the director, Aghanaghi Akhundov, was replaced by documentary filmmaker Yalchin Efendiyev as a result of studio intrigue. Akhundov was not mentioned in the final titles of the film; however, all archival sources as well as the interviews I took from the film authors prove that he did indeed co-direct the film. Elchin Hami Akhundov, who worked on the film as assistant to art director Elchin Aslanov, told me in an interview that “almost half of the movie” was made by Aghanaghi Akhundov; Efendiyev put the figure at around “one third of the film”.

One way or another, as I later found out, Efendiyev was not involved in the production of animated films after Jirtdan, while Akhundov continued working in animation, demonstrating his enduring interest in folk tales and traditional art forms such as miniatures (Fitne, 1970), embroidery (My Chickens, 1975), and carpets (Magic Patterns, 1984).  He was also inspired by traditional Azerbaijani music, working with such legends as Vagif Mustafazadeh. For many of his colleagues, Akhundov was a respected master and the “father of Azerbaijani animation,” in the words of cinematographer Ramiz Aghayev.

In 2016, when I started writing a book on Azerbaijani animation, researchers still claimed that the film was lost — some even stated that it was never completed. However, thanks to the help of Elchin Hami Akhundov, the film was miraculously uncovered in the Azerbaijan State Film Fund archive, digitalised, and, after 49 years, premiered at the first ANIMAFILM International Animation Festival in Baku in 2018. In 2019, we celebrated the fiftieth anniversary of both Jirtdan and Azerbaijani animation. A celebratory program was screened in Azerbaijan, Greece, Poland, Georgia, and Uzbekistan.

The same year, together with film historian Daniel Bird, we proposed Jirtdan for restoration to the Kino Klassika Foundation, which funded the project. In 2022, the film was restored by Fixafilm with kind support of the Ministry of Culture of Azerbaijan and Rufat Hasanov, head of the Audiovisual and Interactive Media Department. Colour grading of the restored film was supervised by Elchin Hami Akhundov. In September 2022, the restored Jirtdan premiered at the fifth ANIMAFILM Festival in Baku.

I’d like to dedicate this text to Hafiz Akbarov, who worked on Jirtdan as a project manager and later became one of the most significant animation directors in Azerbaijan. Unfortunately, he passed away in March of this year. 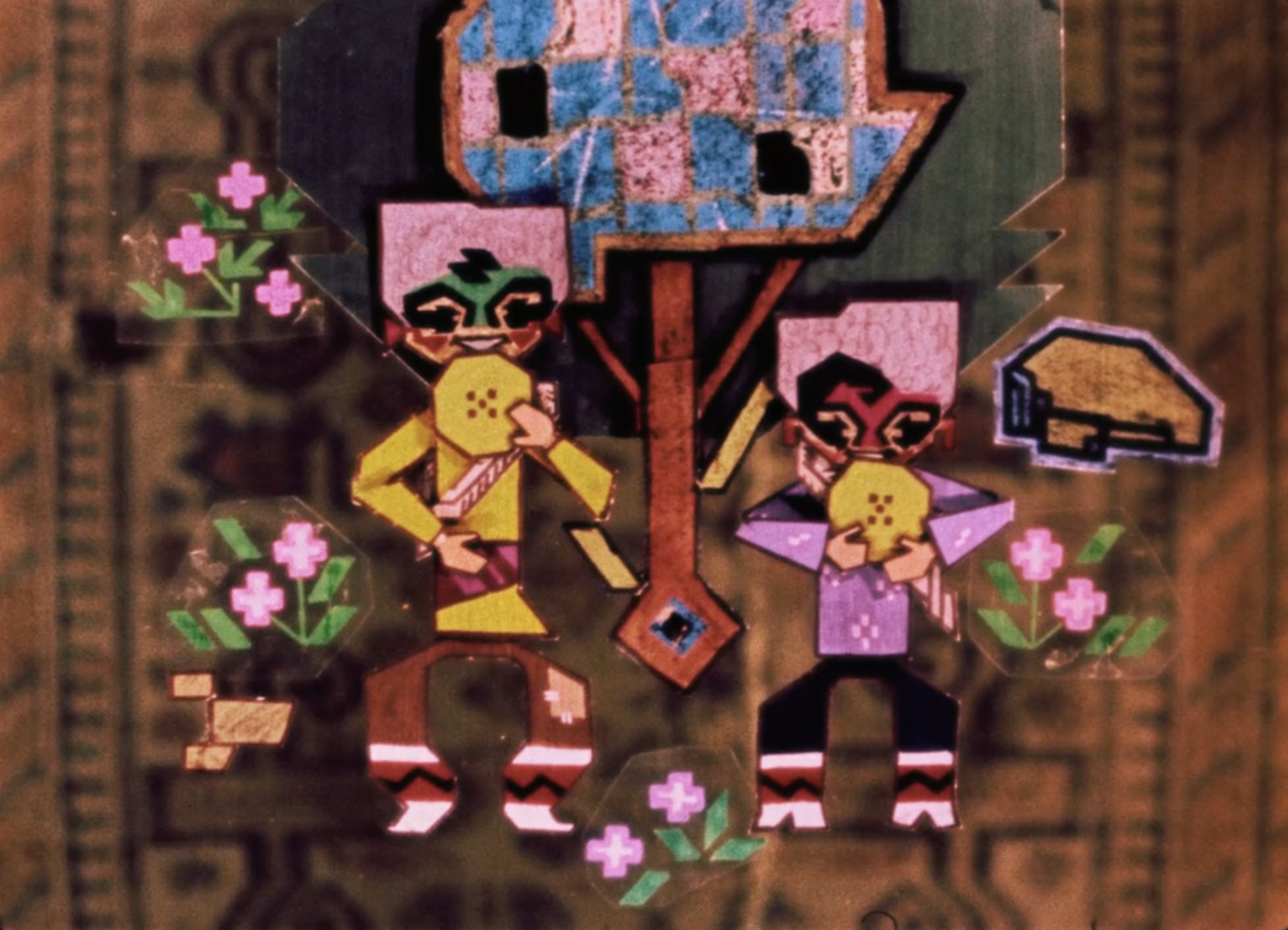 The genre, animation, is a false one. It is predicated on the idea that what distinguishes animation from live action is its relationship to reality. In French, live action is described as “la prise de vues réelles” — that is, made up of so-called “real” shots. In some ways, this misconception can be traced back to the birth of cinema: we associate Géorges Méliès with the fantastic, while the Lumière Brothers are synonymous with reality. Although human experience, however, encompasses both the world of imagination as well as its materialistic counterpart, a persistent dualism has pervaded film culture. Consequently, animation can often be ghettoised. Deemed “not real”, it can be seen as something immature.

Jirtdan (1969) is a case in point. Ostensibly, it is a film for children. This is something discernible not just in terms of tone, but also through Rashid Aghamaliyev’s research into its production history. Nevertheless, it is much more than that. It is also a film not so much about as derived from the rich, regional history of rugs. Its aesthetic is a function of its story — a traditional tale in the style of traditional art. Jirtdan is both an exploration and celebration of weaving patterns, styles, and iconography.

The great film critic André Bazin advocated a type of realism that he exemplified through the then-contemporary trend of Italian neo-realism that we associate with, first and foremost, Rossellini. One would have thought that Bazin might reject the artifice of, for example, Olivier’s Henry V, with its Technicolor, undisguised model shots and painted backdrops. However, Bazin argued that Olivier’s film was true to the reality of tapestries. A similar case could be made for Jirtdan. It is as much about the reality of rugs as it is about the tale of Jirtdan.

Jirtdan is not just one of several appearances of this popular character in the first Azerbaijan animation, but also a film in which the designs and details of rugs are brought to life. The effect is at once hallucinatory and spellbinding

Before animation became synonymous with Disney, it was less a genre, and more of a technique, one called upon by two groups that often blur. The animator is both artist and conjurer. Aesthetically, a parallel could be drawn between Jirtdan and the contemporary Azerbaijani fine artist Faig Ahmed. Both take as their starting point regional traditions of rugs and weaving. They then take their understanding of these traditions in two, radical directions: cinema in the case of the former, fine art in the case of the latter. Both share a psychedelic quality too. Whereas Ahemd refracts rugs through a succession of digital glitches, misprints, and liquid swirls, Jirtdan simulates the experience of falling through layered patterns. In other words, it takes a two-dimensional medium, adds another dimension (time) and creates the illusion of a fourth (depth). A comparison could also be drawn with Yuri Norstein and Ivan Ivanov-Vano’s The Battle of Kherzhenets, which Jirtdan predated by two years. Instead of rugs, Norstein and Ivanov-Vano’s turn to Russian frescoes and paintings. Of the two, Jirtdan is the more playful. Whereas The Battle of Kherzhenets often feels mannered, Jirtdan is considerably more light-footed.

The business of bringing the dead to life, making the inert sentient, has its roots in folklore, the logic (or rather pre-logic) of which depends on magic and myth. For Soviet avant-garde maestro Sergei Eisenstein, this aspect of culture leant itself to animation. A key aspect of Eisenstein’s later theoretical writings concerned the correlation of artistic effect and what he saw as “pre-logical” thought. Early Disney — the Disney of Silly Symphonies, through (parts of) Fantasia and ending with (Willie) The Whale Who Wanted to Sing at the Met — was, for Eisenstein, a key illustration of these principles. Folklore is not just the subject of Jirtdan, but also the key to its form and spirit. The animator is not just an artist, but a magician. Jirtdan is not just one of several appearances of this popular character in the first Azerbaijan animation, but also a film in which the designs and details of rugs are brought to life. The effect is at once hallucinatory and spellbinding.

Of the many incarnations of Jirtdan, this animated film version would appear to be the most atypical. Its omission from film history is, in part, due to the backstage dramas surrounding its production. As a result, its circulation was stymied, and it is only now, thanks to the efforts of Aghamaliyev, that it is being both seen and discussed. If rugs are often unique, then film prints are not, existing in runs between tens and hundreds. Except, however, in the case of Jirtdan. Because of its production history, it survives as a single, faded film print, kept safe by the Azerbaijani National Film Fund in Baku. However, thanks to Kino Klassika and Klassiki, Jirtdan is now both digitally scanned and restored for all to see. The secret is out.

Watch Jirtdan now on Klassiki and explore our selection of other classic animated film here.