Anisa Sabiri is a Tajik filmmaker and the director of Rhythms of Lost Time (2021), now screening on Klassiki as part of our partnership with the Samizdat Eastern European Film Festival. In this exclusive piece, Sabiri explains the history of post-Soviet Tajik film under the influence of Iranian “poetic cinema” — and how the nation’s filmmakers are increasingly at risk of political reprisal. 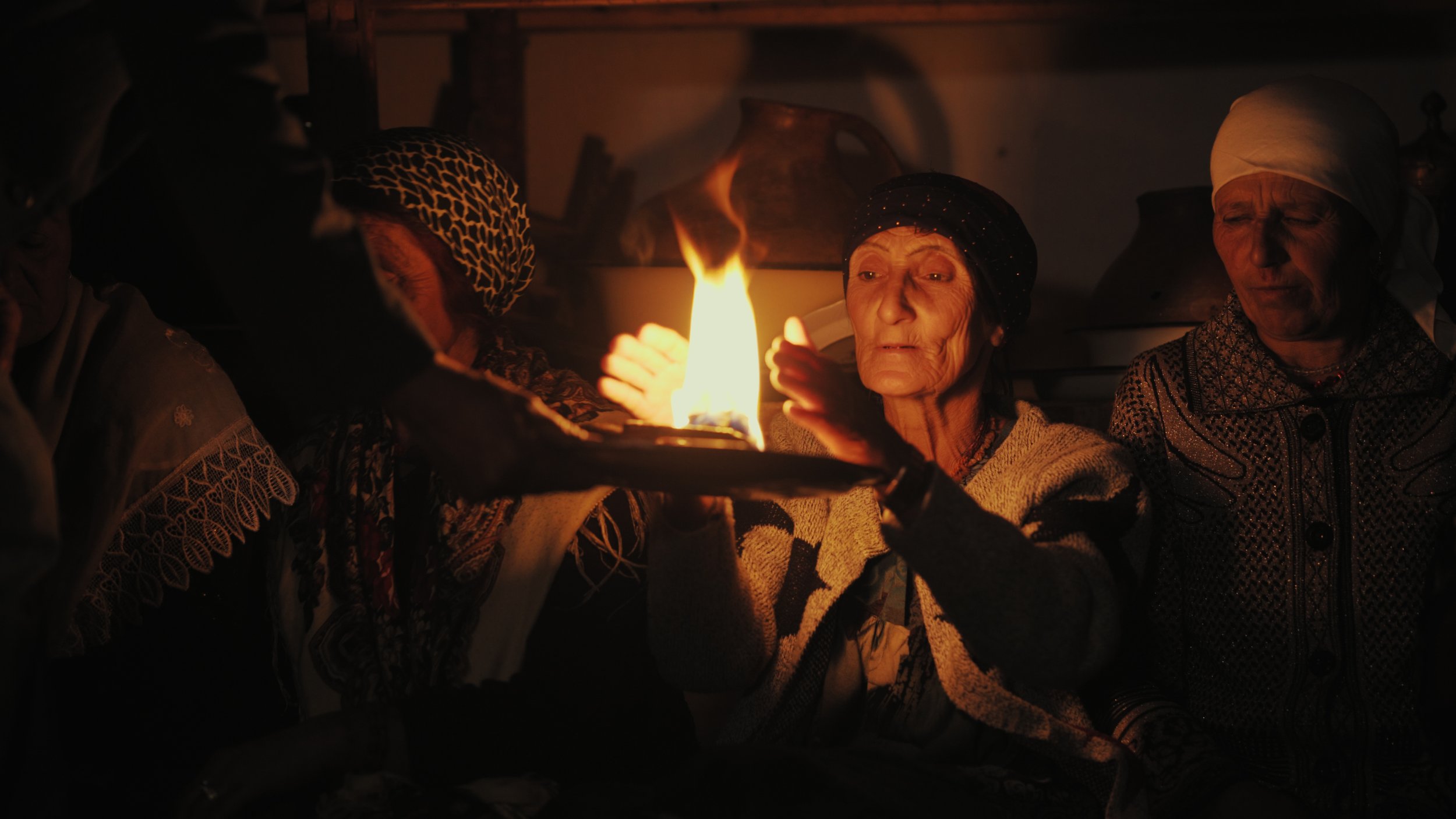 Tajikistan is the southernmost of the former Soviet states, and arguably the least understood. Its culture has been shaped by its ancient Persian roots and twentieth-century Soviet domination; the language spoken there is Farsi, but the official script is Cyrillic. These dual influences permeate every aspect of Tajik society — including its cinema.

As the Soviet Union collapsed, the question arose as to the form that Tajikistan’s independent cinema would take. The first independent Tajik film after perestroika was Bakhtiyar Khudojnazarov’s love story Kosh ba Kosh (1993), which follows a young Tajik woman’s return from Russia to her hometown of Dushanbe. Khudojnazarov studied at the prestigious VGIK film school in Moscow, and the film bears the political hallmarks of perestroika-era filmmaking. A man gambles away his daughter Mira in the Tajik game that gives the film its name. But Mira doesn’t respect tradition, has sex outside of marriage, and opposes her father’s will in defiance of patriarchal society. Filmed and completed, miraculously, during the civil war which took place from 1992-1997, Kosh ba Kosh would be the last Tajik film of its kind for over a decade.

In the place of this brand of homegrown cinema, Iranian poetic cinema took Tajikistan by storm in the years following the civil war. Characterised by a humanistic worldview, foregrounding of subjectivity, and a lyrical visual mode, the poetic cinema of Abbas Kiarostami, Jafar Panahi et al had dominated Iranian film since the 1980s and was well set to influence the nascent film industry of their close cultural and linguistic neighbour. Of particular importance to Tajikistan was the Iranian auteur Mohseen Makhmalbaf, who arrived in the country to make his feature The Silence (1998), a recollection of the filmmaker’s childhood reimagined through Khorshid, a blind boy whose job it is to tune musical instruments. This tribute to the hidden beauty of the world, an example of the finest craftsmanship in poetic cinema, can be read as an allegory for the director’s ability to make a film in a country with no film industry to speak of. Indeed, this masterpiece featuring Tajik children, national costumes, exotic bazaars, and post-war landscapes, was far beyond the abilities of Tajik artists themselves at the time of its release.

Makhmalbaf’s next feature, Sex & Philosophy (2005) tells the story of Jan (played by the prominent Tajik musician Daler Nazarov) and his search for the roots of his loneliness on the day of his fortieth birthday. The film’s subjective realism belies its poetic approach as the director seeks to uncover the essence of love through Sufi poetry, symbolism, and music. These films, along with The Man Who Came with the Snow (2008), constituted invaluable opportunities for enthusiastic but novice Tajik filmmakers to hone their craft under an undisputed master.

The success of these films was an inspiration to the whole of Central Asia, but was particularly deeply felt in Tajikistan, with its claim to be the birthplace of the Persian language. The influx of Iranian film fed into a broader social and cultural identity-building process which became a central part of the state’s post-war agenda. Paradoxically though, the Tajik government’s friendliness toward Ahmadinejad’s new regime in Iran led Makhmalbaf to leave Tajikistan; with neither film institutes nor state funding yet established in the country, its burgeoning poetic cinema movement withered.

Only a few contributions to the genre have been made since then. One of them is Dilovar Sultoni’s short film White Sparrow (2014), depicting a young dreamer from the villages who tries to fly like a bird; another is Sharofat Arabova’s Tasfiya (2017), which focuses on a musician exiled to work in a uranium mine. While Sultoni, a long-term student and colleague of Makhmalbaf, makes a worthy contribution to the genre, Arabova falls somewhat short. Tasfiya is adorned with an abundance of ethnic costumes but never rises above the superficial. The same problems beset Fayzullo Faiz’s feature Waterboy (2021), set in a fictionalised fishing village. The director studied in Iran and soon became an official favourite, enjoying state funding for his reconstructions of Iranian style on Tajik soil. But the state’s pan-Iranian obsession, manifested in the performative fetishisation of ethnic objects, reduces potentially poetic imagery to banality. 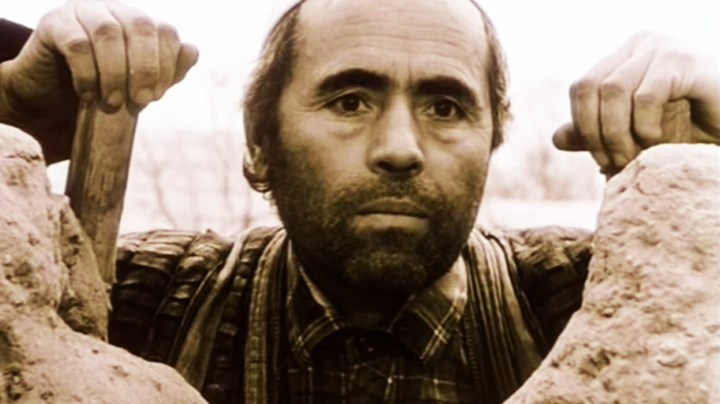 Another consequence of the politicisation of cinema is that early post-independence pioneers like Bakhtiyar Khudojnazarov and his contemporary Jamshed Usmonov, despite international acclaim and popularity, have been criticised for being “not truly Tajik”. Both studied in Russia during perestroika and were opposed to the state-mandated “socialist realist” style in Soviet cinema. Usmonov’s The Flight of the Bee (1998) and Angel on the Right (2002) both premiered in Cannes, which was enough for the stakeholders at the state-run TajikFilm studio to dismiss them as excessively Europeanised. Yet both Usmanov (now based in France) and Khudojnazarov (who has lived in Berlin) brilliantly convey Tajik life and culture in their work. Usmanov uncovers the deepest layers of a patriarchal culture in his provincial hometown of Asht, using them to drive the multiple narratives of his films. In the magical realist Luna Papa, Khudojnazarov implicitly critiques the impact of Russian colonialism — for instance, when the main character Mamlakat (whose name means “motherland”) is seduced by a Russian aircraft pilot and, in a dream-like fantasy sequence, falls pregnant.

With TajikFilm being the only film funding institution in the country as well as the only issuer of film licenses, alternative or independent filmmakers face enormous obstacles — I had to fake the script of my crowdfunded short film The Crying of Tanbur just to obtain permission to shoot, which put every day of filming at risk. My subsequent feature documentary Rhythms of Lost Time— a poetic depiction of endangered Persian customs in remote areas of Tajikistan — was also funded from abroad, although it did gain a degree of support at home. The stated aim of promoting national traditions even meant I was granted permission to film politically-sensitive and secretive customs. When the film was screened, however, state-affiliated attendees lamented my Russian-accented Tajik on the voiceover, and suggested it be re-dubbed by a TV newsreader.

independent filmmakers face enormous obstacles — I had to fake the script of my crowdfunded short film The Crying of Tanbur just to obtain permission to shoot, which put every day of filming at risk

Other independently-funded Tajik filmmakers find themselves frozen out by the TajikFilm elite. Bekhrooz Davlyatbekov, Daleri Imomali, Makhpora Kiromova, Roman Buryak, Abdullo Ghurbati, and Diloshub Orifzoda each developed their filmmaking style after moving into the industry from the world of journalism. This background leads them to makes films reflecting the issues facing contemporary society; they are therefore destined to remain outsiders.

In 2018, I founded an experimental film school in Dushanbe and collaborated with some of these directors, hoping to generate a new wave of filmmaking. International tutors were invited to give workshops, and some debut films were produced. At the screenings, the venues were always full. It seemed that underground filmmaking was poised to take flight, unhindered and free of judgement. Was I naive? Sadly, yes. I am now making my own first feature film outside Tajikistan. I am grateful to have my freedom. Daleri Imomali and Abdullo Ghrubati have both received prison sentences for their work. The rest are too scared to continue.

Watch Rhythms of Lost Time on Klassiki until 13 October.