Lana Gogoberidze on women’s cinema and her trailblazing career

93-year-old Georgian filmmaker Lana Gogoberidze is one of the most influential female directors to emerge in the Soviet Union, alongside the likes of Larisa Shepitko and Kira Muratova. Her intimate domestic drama Some Interviews on Personal Matters is screening now as Klassiki’s Pick of the Week. One of the most vital films produced in Soviet Georgia, this pioneering work displays Gogoberidze’s long-term commitment to capturing the complexity of women’s lives onscreen. We spoke with the director about her approach to women’s cinema, her experiences studying at VGIK alongside contemporaries such as Andrei Tarkovsky, and the promising future of Georgian film on the international stage. How did you land on the idea of making the film Some Interviews on Personal Matters? As your third feature, why was it important to you to make this film at this point in your career?

It’s always difficult to define why you decide to make a film. Maybe I had something to say, and I wanted to shape what I could say. I consider cinema the best way of communicating with others, but at that time it really was very difficult in the Soviet Union. When I was young, I had no opportunity to go to Moscow. There was only one film school in the whole of the Soviet Union, and it was in Moscow. My father had been arrested and shot, and my mother had spent ten years in a concentration camp, so it was impossible for me to study film. I studied philology at university here, and my thesis was on Walt Whitman. I loved his poetry very much, his poem of freedom, The Song of the Open Road. Only after the death of Stalin could I go to Moscow. Maybe, unconsciously, I was also attached to the idea [because] my mother was a filmmaker. She was the first filmmaker in Georgia. In the Soviet Union there were two or three of them at that time. She made two films before being arrested, and her career was over. Maybe this was also a motivation for me to become a filmmaker.

I read somewhere that it was impossible to watch your mother’s films growing up, that you only found copies much later in your career. Were you at all inspired by your mother and by the conversations you’d had with her before you went to film school?

Of course, I had conversations with her, but she didn’t speak about her films. I only saw her films many years after her death, 40 years in fact. But we have finally seen her films and now they are shown all over the world. Right now, I’m making a film about my mother. I want to tell her story. It is a very dramatic and even tragic story, but at the same time, it is a story that is very emblematic of that epoch. All events, political, social and so on, are reflected in her fate. She really was a very interesting filmmaker.

I wanted to ask you about your experience at VGIK. There was a whole generation of inspiring filmmakers like yourself, Kira Muratova and Larisa Shepitko. When you were at film school, were you inspired by your classmates and by what other female filmmakers were doing?

I can’t tell you much about my encounters with other filmmakers, but for instance I knew Agnès Varda very well. We spoke a lot about cinema, but especially women’s cinema as a possibility, a means through which to express your attitude towards anything: towards life, towards death, your feelings in general. We spoke a lot about this. I also knew Márta Mészáros and Věra Chytilová. We were both studying under Gerasimov with Kira Muratova, and we really were very close. We always discussed our films.

It was a very interesting time to be at film school. All the energy, the cinematographic energy, was concentrated on the film school. And we really were free to express what we wanted. That’s why it was such an inspiration for all of us, and Gerasimov, well, he was a great teacher. I don’t know how to express it, but we spent all our days and half the nights together, working, making films, and having experiences. During that same time, [Andrei] Tarkovsky was there studying. We weren’t in the same class, but we were all friends, [Vasily] Shukshin, [Eldar] Shengelaia and so on. It really was a time of such inspirational work.

At that time, all the energy, the cinematographic energy, was concentrated on the film school. And we really were free to express what we wanted.

To return to the film itself, one of the things that I absolutely love about the film is this combination of the heroine’s story – her struggle to balance her work and home life, which is something of course that every woman with a career faces – and the way this story is intertwined with these two-camera interviews with other women. How did you find the other interviewees for the film?

My intention when I began to make this film was to tell one woman’s story, but to have it crossed with other lives. This was very important for me, to have her life not only intertwined with others, but also with her own past. And I found the best way was to have Sofiko as a journalist who interviews other women. This way, I could show the whole range of women’s social lives in the Soviet Union more generally, but in Georgia and Tbilisi especially.

All these women were actresses, but everywhere I go I’ve always been asked whether they were documentary interviews. All of them were actors, and the script was written before. It was all my imagination, not a documentary. What is interesting is that for the film to be accepted by Moscow – without their consent a film could not be made – I was told that I had to remove all of the scenes with other women, and with the mother. Only then, I was told, will it be a good film about a woman and her family. Can you imagine? They wanted to remove everything I had to say, which was unacceptable to me. Somehow, I don’t know how, but eventually it was accepted.

Of course, the lead character is a woman in a man’s world, and that must have resonated with you as a female filmmaker in a male-dominated world. Even though the character is a journalist, were you drawing on your autobiographical experiences when you were creating the character with Sofiko Chiaureli?

Yes, of course. As it is everywhere for women in cinema, and at that time specifically, it really was a male dominated society. But I didn’t feel any kind of discomfort. All these filmmakers were my friends, and we really were working together and helping each other. There was such a solidarity among filmmakers, I never felt alone. Of course, it is a problem, and it was a problem for [the character] Sofiko, too.

There was this peculiarity of the Soviet Union. Whenever I went abroad, everyone would ask me how my salary compared to men. But if there was one progressive part of the Soviet Union, then it was this. From this point of view, there was no difference between men and women. The difference only began when you were truly devoted to your work. When women were as devoted to their work as men, then it became a problem, as it does for Sofiko [in the film]. When she was able to work, and also return to her home life, there wasn’t a problem. Yet as soon as her husband felt like she was sacrificing their family, their home life and family relations, he couldn’t accept it. 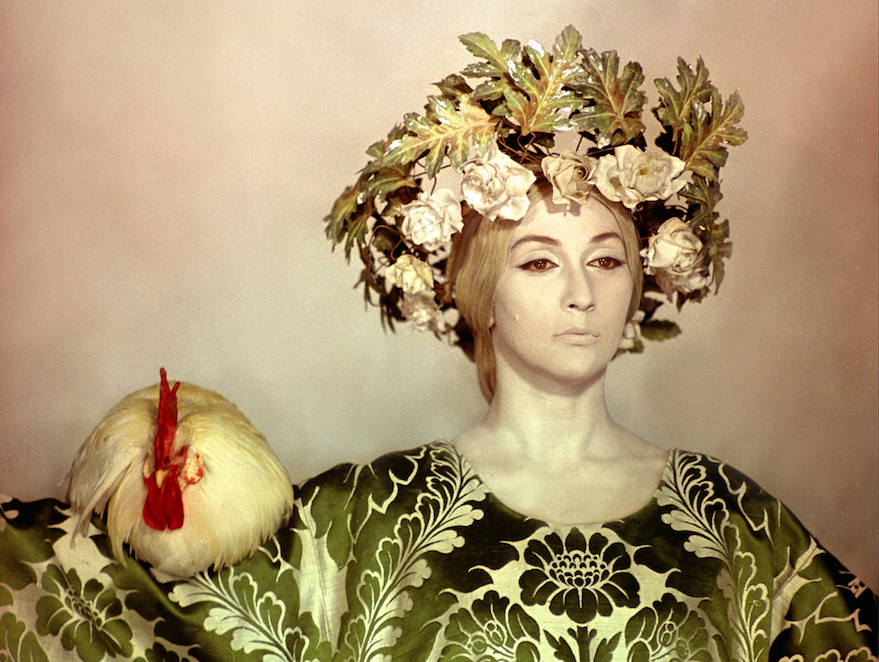 Could you tell us a little bit about working with Sofiko Chiaureli? Most of us will know her from the Colour of Pomegranates (1969), but how did the two of you find each other? Did you develop the role together?

Generally, you write your script, and only afterwards do you begin to choose the actors and actresses. But this was not the case. When we were writing the script, I was thinking only of Sofiko. I didn’t have to choose her, as I knew her very well. We were friends from childhood, and though she was younger than me, we were both at VGIK together. I knew that I was writing this character for Sofiko Chiaureli.

We never had any difficulties, and we understood each other very well. She wanted to say what I wanted to say, and it really was very easy to work with her. There was only one scene where she couldn’t imagine playing the role. It is the scene where she sees her rival, and she couldn’t imagine ever playing this role of being so humiliated. This was a problem for me, because I knew that without this scene it would be impossible to create this character. After many discussions, she finally decided she would play the role. And I think it is one of Sofiko’s best sequences in the film.

Do you have any thoughts about why the film became such a success internationally?

I think that you would know the answer to this better than me! Possibly because of the themes. It’s now so fashionable to speak about women’s problems. Maybe the style of the film, too.

Following from that, and talking about the style of the film, were there particular filmmakers that you were inspired by? Some have pointed to the influence of Neo-realist Italian cinema. What would you say to that?

Of course, our cinema was influenced by the Nouvelle Vague française and Italian Neo-realism. There was a connection between these events in Georgian cinema and the cinema of the ‘60s that is now so popular around the world. For me personally, I was most of all influenced by Ingmar Bergman. I loved his approach to life, to women’s fate generally. One of his most beloved films of mine is Autumn Sonata, and also Fanny and Alexander.

I have this impression that there’s a new generation of young Georgian female filmmakers who are really making very exciting and interesting films. After screening Some Interviews on Personal Matters, we will be screening Ana Urashadze’s Scary Mother (2017). If you could share one piece of advice to a young filmmaker, what would that be?

There was a moment in our history when I really thought that cinema no longer existed in Georgia. It was after the dissolution of the Soviet Union, when we became independent. We were under the impression that we could make everything, that we were free and there was no censorship. But nothing was made for at least 10 years. We felt like the cinema of Georgia had died. But after a while, it picked up little by little. I am really happy that there is now a real new generation of Georgian filmmakers, and especially women filmmakers. There’s a lot of interesting women. One of them is my daughter, Salomé.

But when it comes to advice, I never really give advice. I don’t know how to make cinema, it is just an intuition. We have a very good connection with our new young Georgian filmmakers. Their approach to reality is quite different, I would say, but for me that is what is interesting. I think with the new Georgian cinema that exists, this is why there is such an interest toward the whole of Georgian cinema everywhere.

Some Interviews on Personal Matters is screening on Klassiki from 30 June.