Landscapes of Collective Fate: the political resonances of nature in Armenian cinema

During the closing scenes of Henrik Malyan’s 1969 magnum opus, We Are Our Mountains, the film suddenly shifts genre and turns into a road movie – of sorts. The group of shepherds who have been under investigation for the “theft” of a few sheep embark on a two-day trip from their mountain enclave to the capital, taking their herds to the slaughterhouse and themselves to face the court. As they make their way down from the heights, accompanied by their investigating officer, the shepherds act out the possible court proceedings, imagining how the Soviet judicial system may judge the extent of their purported “crime”. Some of the men try to reason their way out of what is essentially a comedy of errors, while the others assume the inflexible position of the State, for which any violation of law is a direct breach against the system’s raison d’être.

For local audiences watching the film in 1969, this absurdist situation would have been tinged with a palpable anxiety that Soviet citizens were all too familiar with. The memory of Stalinist repressions was not far in the past and any action deemed – even on a symbolic level – to be a transgression could still have tragic and cruel consequences. Like Beckett’s Godot, the State is a key character in Malyan’s film that, while never made visible, is omnipresent in almost every scene. But the film’s greatest achievement are not the subtextual, anti-system jibes that pepper Hrant Matevosyan’s script. Rather, it is the way that We Are Our Mountains gradually reveals a power that transcends the Kafkaesque mechanics of officialdom. That entity is the land itself. With the help of his frequent collaborator, cinematographer Sergey Israelyan, Malyan constructs lusciously deep-focus vistas of the rolling mountains and ravines that seem to stretch to infinity, perennially escaping the grasp of the camera or anything else that tries to contain them.

These awe-inspiring locations in Armenia’s north-western Tavush region inescapably evoke the sublime and the film is replete with characters who constantly reiterate how their very existence depends on the whims and vicissitudes of nature’s cycles. And yet, Malyan’s treatment of Matevosyan’s script escapes the expected dichotomy of man versus nature. Having acknowledged the unfathomable magnitude of the natural environment, the villagers simply go about their business by working with the unwritten laws of the land. While distinctly uneven, this is a relationship that is infinitely more harmonious and productive than the one the villagers have with the State, which sees both nature and its citizens as objects of conquest and subjugation.

As the title makes explicit, We Are Our Mountains posits the locals as an extension of the land, and uses the possessive pronoun to frame the location not as abstract space, but as place. Instead of the wilderness of the European Romanticist tradition, we see here a territory hewn by centuries of continuous human engagement. As such, this land appears as the antithesis to the technocratic madness of the twentieth century so ingeniously encapsulated in the montage prologue compiled by the great Artavazd Peleshian (cleverly cast by Malyan in the role of the film’s daft “victim”, Revaz). In contrast to the fragmenting, rupturing, and exploding world of modern civilization – that unsurprisingly goes bang with the atomic bomb – the director presents us with a mode of life where people and nature still operate as a unified ecosystem.

Instead of the wilderness of the European Romanticist tradition, we see here a territory hewn by centuries of continuous human engagement

Constantly evoked throughout the film, this idea is potently embodied in the closing scenes. As they trek down the dirt road towards the city, the shepherds are suddenly hailed from the peaks above them. Having spotted the convoy, herdsmen from the neighbouring village invite them over for a barbecue. The shouts of the invisible shepherds reverberate through the gorge, and it appears for a moment that the mountains and the rocks have suddenly gained speech and are conversing with the film’s protagonists. This allegorical dialogue, which condenses the entire plot into a few shot/countershot images is echoed by a visual device that frames the characters like a chain of interlocking peaks (a form also employed by the film’s poster). Even the antagonist of the film – Sos Sargsyan’s pedantic but conflicted policeman – assumes the position of the shepherds, shouting “We’ve stolen… Stolen!” The filmmakers’ critical imperatives here couldn’t be more transparent. In their connection to land, the villagers assume a strength that defies the autocracy of the State.

The provocation of this message was even more palpable coming right after the student revolts in France, the failed anti-Soviet uprising in Czechoslovakia and the consistent push in the Armenian arts to foreground hitherto repressed narratives of national identity and history during the 1960s. In fact, Malyan’s film was one of three seminal works released in 1969, which helped to consolidate a cinematic model or language for Armenian self-representation on the screen that had been percolating since the first Armenian feature – Hamo Bek-Nazaryan’s Namus (1926). Radically different in style and philosophical worldview, Sergei Parajanov’s Colour of Pomegranates and Artavazd Pelechian’s We shared with Malyan’s chef d’oeuvre a fundamental preoccupation with the role of the landscape in the construction of the Armenian cultural imaginary. The key here, however, was not this fixation per se, but the way these films formulated a specific idea of the natural environment as a collective paradigm for being in the world. 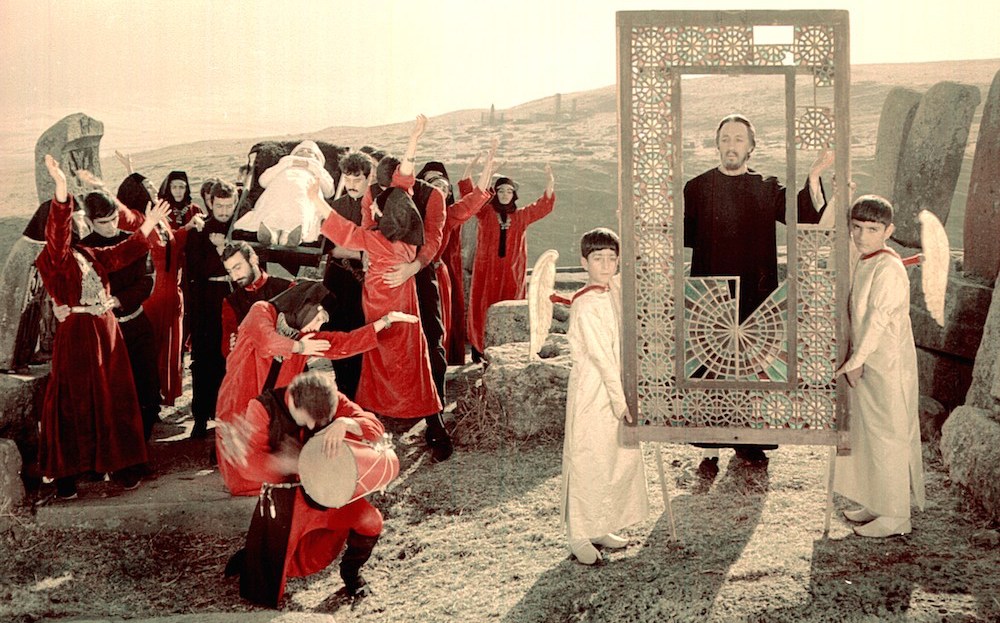 In tandem with films from elsewhere in the USSR, Armenian cinema prior to the cultural “Thaw” of the post-Stalinist 1950s foregrounded the conquest of land and nature. Stripped of its semantic and spiritual functions, the “pacified” landscape of Stalinist cinema is rendered meaningless outside of the State’s rhetoric of productivity and control. Nevertheless, even under those oppressive conditions, a proclivity towards a mythopoetic conception of the natural environment flickered and seeped through in films by pioneering directors like Hamo Bek-Nazarian, Patvakan Barkhudaryan, and Ivan Perestiani. This tendency finally became a subject in its own right during the years following Stalin’s death. Buoyed by a newfound critical attitude towards progressivist ideology, an emergent ecological consciousness, and more subliminal awakenings of nationalist discourses, post-Stalinist Armenian cinema focused on the native landscape as a symbolic anchor around which ideas of collective identity and national history could pivot.

Often articulated through the metaphorical lexicon of late-modernist cinema, the landscape in these films is a “saturated” one. It is the opposite of the Herzogian vision of a wild, alien, and sublime phenomenon that comes to punish the “civilized” world for its sins. Rather, the saturated landscape of the Armenian screen is a terrain that equates nature with culture, permeating it with human traces that have become part of land, turning the latter into a site of embodied memory. The screenwriter of We Are Our Mountains, novelist Hrant Matevosyan, defined this lived environment as something that goes beyond the imperatives of the State and the Nation. Armenian films of the post-war era develop this idea visually, rendering such places as intimate domains built over the centuries, that nurture and protect those who have learnt to read and respect the “knowledge” of the land.

Somewhat expectedly, in Armenian cinema, these characters are usually people who exist on the margins of the society – peasants, artists, and outcasts. They are the harvesters rolling down the hills with their haystacks in Pelechian’s The Seasons (1975), the traumatised farmers who rush to protect the seedlings from the hail in Malyan’s Nahapet (1977), only to “murder” the blossoming trees in Grigor Melik-Avakyan’s Apple Orchard (1985). It is also the banished troubadour in Parajanov’s Colour of Pomegranates (1969), who accepts a handful of earth wrapped in lavash from the angel of death, or the wily servant in Dmitri Kesayants’ Master and Servant (1962), upending his work regime to topple a despotic landowner. Devoid of direct agency, the ordinary man and the outsider use nature as a site of resistance, becoming a moral compass for the bigger, more pernicious issues that form the subtextual framework of Armenian films from the post-Stalinist era, namely: whom does the land belongs to, and who to it? In the context of socialism’s imperative towards cultural homogenisation, this question of belonging and the very notion of a “place” accrue political urgency.

It is for good reason, then, that the Armenian landscape appears so infused with melancholy on screen. It is a sensibility fuelled by an endless narrative of loss and dispossession, irrevocably marked by the memory of the 1915 Genocide of the Ottoman Armenians. The mountainous vistas of films as recent as 2020’s Should the Wind Drop are shadowed by these traumatic experiences that imbue the landscapes with the disquiet of uncertainty. Hence, however lyrical, or expressive, depictions of nature in Armenian films are connected by an undeniable groundedness in the harsh reality of toiling and retaining the land. 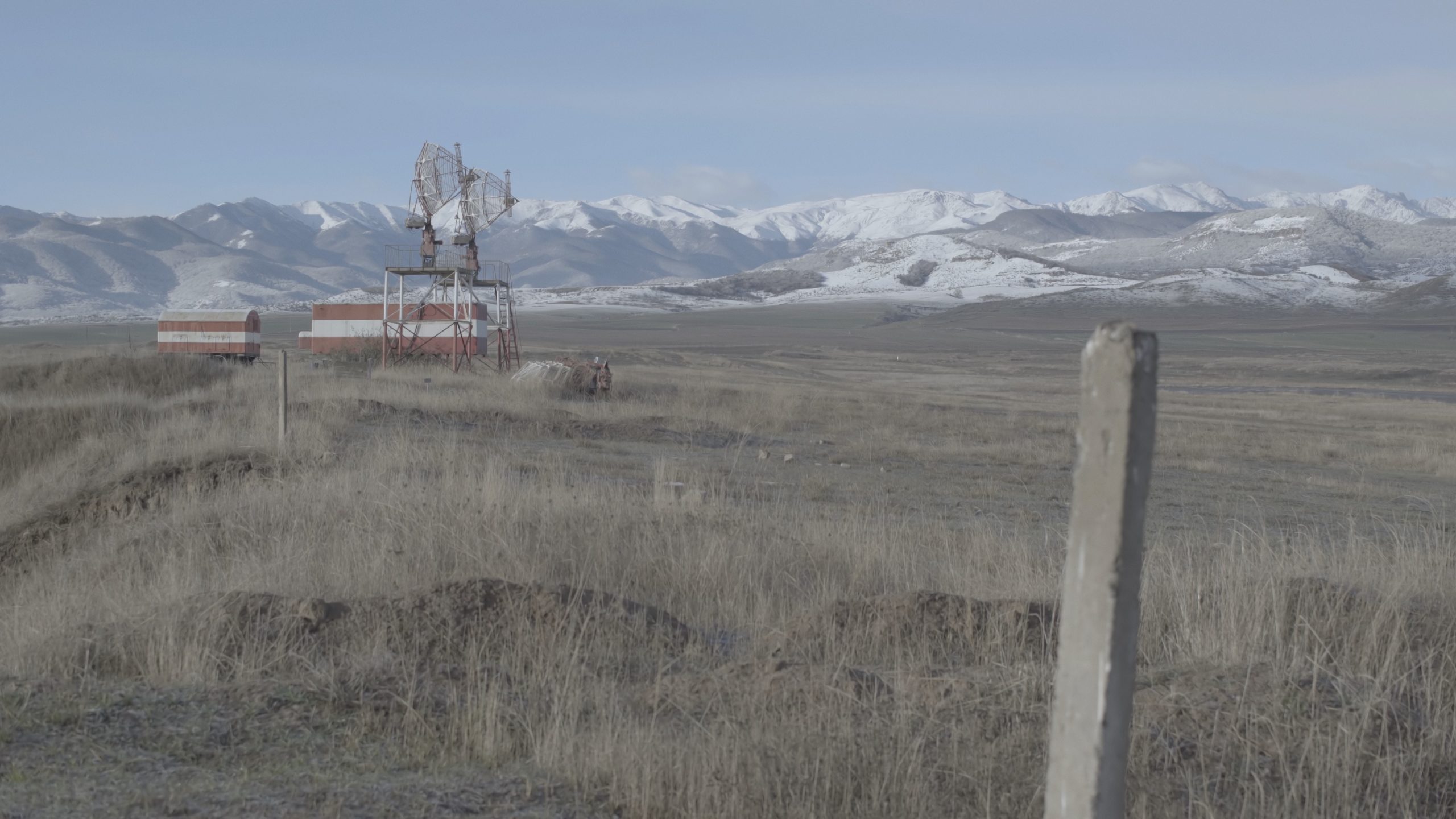 This fateful burden is akin to an archaic ritual of human sacrifice, which is echoed in the bitter words of Aghun, the acerbic heroine of Bagrat Oganesyan’s Autumn Sun (1977, another Hrant Matevosyan adaptation), who reminds her younger son that “what the city takes, it keeps. We – your dad and I – have created you for the village, and for us.” Even in instances as poetically abstract as Colour of Pomegranates or We, the work of “making” and “keeping” landscapes is never out of sight. It is this practical outlook on the human relationship with the natural environment that sets apart modernist Armenian cinema from the transcendental spiritualism underlying the role of the landscape in Russian or Georgian cinematic traditions of the same period.

The inevitable cost and commitment required to make space into place is the running thematic thread that has proved to be the most resilient in Armenian filmmaking since the 1920s. Even when the issue becomes an opportunity for absurdist comedy, as in Bon Voyage, Garegin Papoyan’s brilliantly deadpan 2021 documentary about the non-operational airport in Stepanakert, whose stuff devotedly perform their duties despite the lack of flights, the importance of maintaining one’s belonging to a place remains an overarching statement. This sentiment encapsulates the ethos of “rootedness” in Armenian cinema as a primary code for relating to the wider world. It’s the metaphysical lighthouse that guides people through the chaos of history, like the ambivalent scientist of Frunze Dovlatyan’s Hello, It’s Me! (1965) who, at the end of the film, wanders the lunar landscape around the Aragats mountain, almost as if pulled by unseen energies. When asked by a couple of picnicking locals whether he’s lost, the physicist responds with a calm conviction, “No, I know these places well”, and disappears back into the rocks.

Watch We Are Our Mountains, Should the Wind Drop (from 19th May – 2nd June), and Bon Voyage (from 26th May – 9th June), all as part of Klassiki’s season of Armenian film, Spaces and Places.